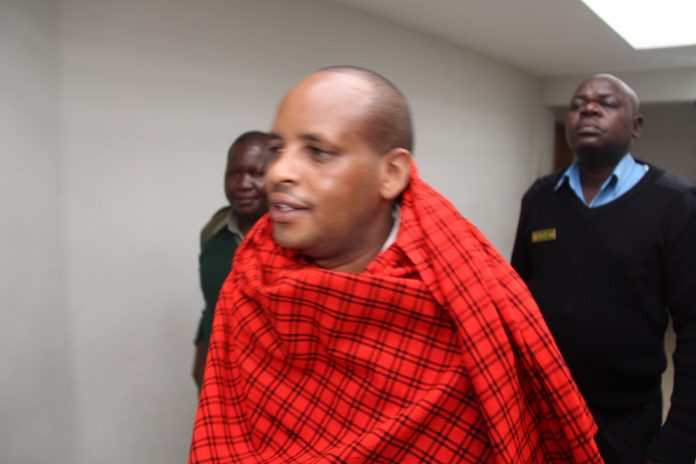 Laikipia North Member of Parliament Mathew Lempurkel has been released on a Cash bail of 100,000 shillings.

It is alleged that on 21 of November 2016 at Harambee house in Nairobi willfully and unlawfully assaulted Nominated member if Parliament Sarah Lorene by slapping her on the left cheek .

The prosecution further claims that the accused kicked Lorene on the lower abdomen occasioning her actual bodily harm.

He was arraigned in court this morning after spending night at parliament police station.

It is alleged that the offence was committed at the office of Interior Cabinet Secretary Joseph Nkaissery office.

An application by His lawyer Saitabao Ole Kanchory to postpone the plea along was dismissed by the court.
Saitabao submitted that the charges against his client were malicious.

“The charge is manifestly illegal and abuse of court process,” argued Saitabao.

An application that was opposed by the prosecution.

State Counsel Daniel Karuri said that the charges against the legislator are proper before the court.

“Charges before this court are not malicious,are not brought in bad faith or to embarrass the accused as it’s being alleged “submitted Prosecution.

Mr Karimi requested the court to compel the accused not to interfere with witness on the ongoing investigations regarding the matter.

“The court should consider the right of victim in this case”said Karuri.

The cause of the fight between Lempurkel and Lekorere has not been established but the latter claimed her counterpart confronted her wanting to know what they discussed with Nkaissery.

The two have been disagreeing over how to handle the invasion of Laikipia by Samburu pastoralists from the north.

Six female legislators piled pressure on the government for Lempurkel’s prosecution, saying he should not have sent Lekorere an abusive message and that women should be respected.

The MPs condemned Lempurkel for sending the message, asking Lekorere to withdraw the assault case, quit politics and drop her political ambition for the Laikipia North seat in 2017.