Sweeping out Governor William Kabogo was the best decision I must celebrate Kiambu residents for; allowing Governor Ferdinand Waititu chest thump juvenile agendas is a bad dream that residents must wake up to.

I have tried to hide my face from his speeches, actions and frequent deflations but enough is enough.

First, Kiambu is President Uhuru Kenyatta’s home county, his backyard. Knowing it is his home is not enough, but understanding the intrigues that come with being his home county, Waititu must use that opportunity to help the people of Kiambu.

Since Waititu came to power, Kiambu has been in the headlines for the wrong reasons. He has been throwing tantrums at everyone who casts a shadow at his leadership.

He has bashed his Deputy James Nyoro, the Women Representative Gathoni wa Muchomba and to add salt to injury, sacked his CEC John Mugwe who was the Roads minister before being moved to the Environment docket over insubstantial allegations.

The elephant in the room is not even the relationships with other county officials, but enhancing alcohol intake among the sons and daughters of Kiambu.

This is the worst agenda any Governor would get involved in, and do you know for what purpose, to be popular.

Has Waititu closed bars where this young people take their liquor? No. Does the county follow up on how the Sh2 million they pay daily is used? No. How many addicts have been rehabilitated through this program? No survey has been done. Can the Governor justify the use of Sh2 Million daily which is almost a billion per year? No.

A public smear between the governor and other leaders of Kiambu County should worry Kiambu residents. On June 8 at Deputy President William Ruto’s Event in Kikuyu, Governor Waititu rubbished the Women Rep asking her to gather her own youth to help and leave his program.

I have said enough on the simmering differences.

But, I must say that Governor Waititu has good intentions with the initiative. These are our sons and daughters. Alcoholism is a big problem in Kiambu. However he must do the following that serve as my second and third realities;

Secondly, he must set aside his ego, rethink the program and implement it in a better way. It is not weakness to involve his deputy or any other person he trusts for strategy.

I believe that if the Governor funded a wing in every sub-county hospital to address alcoholism; that would be a better strategy.

A hospital wing is a lasting solution but giving our sons and daughters Sh400 per day is just an instant tea solution that does not last.

Lastly, as I have always held, this is my just opinion; you can take it, work or re-work it, apply it or just ignore or rubbish it. 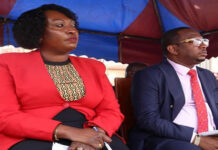 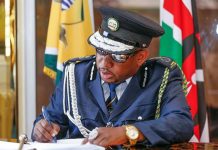