Former PS Lillian Omollo facing graft charges related to NYS II scam has suffered a major below after the court dismissed her application seeking to visit her farm in Uyoma, Siaya County.

“In my view, a site visit to a farm to establish whether or not farm can be the source of large sums of money deposited in bank accounts kilometers away, would be really to chase after mirage,” said Onyiego.

The judge further said other than establishing that a parcel of land exists, site visit would not in any way advance the application before court by way of demonstrating the source of the funds in the subject accounts in any way.

The judge added that the application would further delay of the hearing of the case, for the recovery of the funds.

The former PS filed application in court dated July 1, 2019 pleading with court to visit her farm on Siaya County to prove existence of the alleged farming.

Through lawyer Stephen Ligunya urged the court to visit her multi-million shilling horticulture enterprise she runs. “I pray for the court to visit the property on the subject of this suit in Uyoma, Rarieda District to ascertain if the farm exists as it will help the court make a just conclusion in the matter,” she submitted.

Assets Recovery Agency (ARA) investigator Isaac Nakitare traveled to Siaya County together with a colleague and found that there were no farming activities as alleged. They reportedly saw a parcel of land with shrubs.

Whereas the land was still bare, with no farming activities, lawyer Stephen Ligunya maintained that part of the money frozen by the court and which subject to forfeiture to the government, was proceeds from the farm.

“The visit will give the court an opportunity to know the legitimate source of her income. The visit has an objective opinion. That is all we are asking,” added Ligunya.

However ARA through lawyer Mohammed Adow vehemently opposed the application saying Omollo was given an opportunity to explain the source of the money but her answers were not satisfactory, making the agency to conclude that they were proceeds of crime.

Omollo has since maintained that she has greenhouses, where she farms tomatoes, cucumbers, watermelons among other crops.

She said she took up serious farming five years ago and some of the deposits made in the frozen bank accounts were proceeds from the farm and not from NYS.

Adow said Omollo has not tendered any evidence through affidavit or through statements on record of the ownership or existence of the alleged farm business and shred of evidence to demonstrate that the funds in issue are from the alleged firm.

Nakitare said the farming business is a disguise meant to conceal the source of the funds and “classical scheme of money laundering”.

The investigator said that there were some small tomatoes on a small sized greenhouse, which were yet to mature planted inside the green house, but not at commercial scale level.

“There is no shred of evidence to show linkages between the funds in issue and the alleged farm which our investigations established does not exist,” he said.

Omollo has fought off claims that the frozen accounts held money suspected to be proceeds of crime and stated that there is no nexus between the money and the National Youth Service, to warrant the forfeiture.

The agency filed the application seeking the forfeiture of about Sh35 million, held in several accounts it suspects are proceeds of crime.

Documents filed in court state that the amounts were deposited between January 2016 and March 2018. Omollo was appointed PS for Public Service, Youth and Gender Affairs on December 18, 2015. 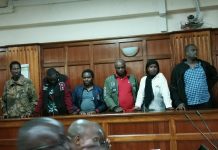