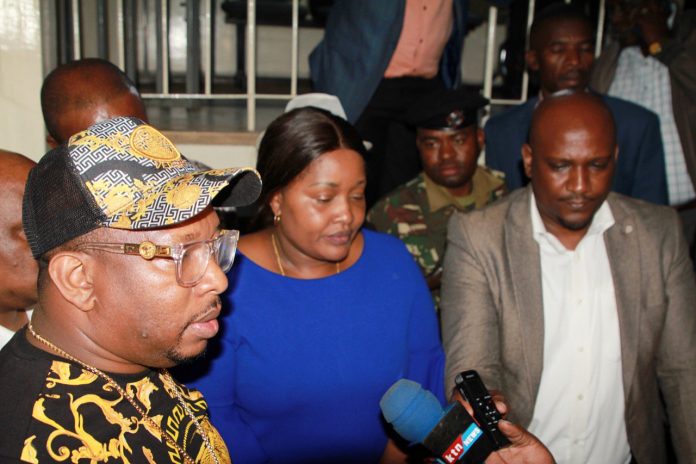 “Pending the hearing and determination of this application, there be a temporary stay of execution of the warrants of arrest issued against applicants and warrants of December 5,2017 and or any warrants thereafter of howsoever on condition that the applicant shall each deposit Ksh 50,000 in court within 7 days as condition for the stay herein granted.”, ordered Judge Nyamweha.

The four move to court after Proland Limited and Iris Properties in 2017 obtained court orders to have them arrested for not paying a debt of Sh35 million to their companies.

Sonko’s administration under certificate of urgency is seeking to block the execution of the arrest warrants issued on December 5, 2017 to the county officials and their families in their personal capacity notwithstanding that they have no control over liquidity or financial control of the Nairobi County government ( formerly city council) in the matter.

“The said companies are in the process of executing warrants of arrest against the applicants in their individual capacities notwithstanding that they are not in control of budgetary allocation of the Nairobi City County,” reads the Court documents.

“The applicant is not in control of budgetary or resource allocation of the Nairobi County Government. The budgetary allocation is a constitutional mandate under legislature on one hand and the county assembly on the other hand,” said the county government.

The court heard that there was real danger that the said county officials may be investigated for conspiracy and prosecuted in impending breach Anti-corruption and economic crimes act for what is now imminent wanton theft and plunder of public resources.

“At the end of all this, someone must take responsibility for paying approximately 300 million from a paltry Sh35 million band plunder continues,” court documents read.

It added that Iris Properties Limited while using police force cannot be within the law to invade the county staff spouses, homes and children in a bid to collect debt or execute on a debt unpaid.

The county government has questioned a debt of Sh 35 million would attract such high handedness on part of police when it emerged that esoterically, Iris Properties have been paid a whooping Sh 297,083,794.

Nairobi County has already filed a complaint with director of criminal investigation which is under investigation.

The county informed the court that Iris is planning or threatening to execute against county officials against their persons in their homes at 3 am and against their families contrary to the law.

On October 26 and October 28, 2019 on all occasions at 3 am director of Proland limited Fredrick Mungai alleged judgment creditor accompanied by a contingent of male police officers without any justification invaded the private homes acting county Secretary Leboo entered and attacked his family and picked them for questioning and also arrested them.

His daughter a four year law students at University of Nairobi was arrested and whisked away without company of any relative. She was molested and detained and later released without any charges.

Last week 50 uninformed police officer invaded the Nairobi county offices to arrest the said county staff.
The case will be heard on November 19 for further directions.