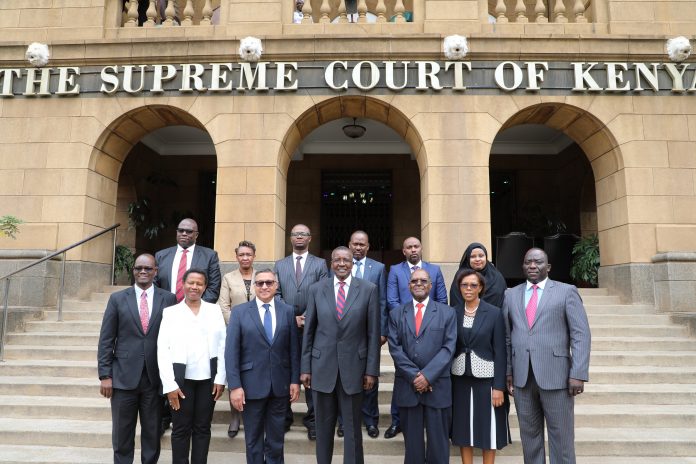 The high court has suspended proceedings before a tribunal appointed to investigate the conduct of a high Court judge.

“Pending the inter parties hearing or further orders or directions by the court on the application, there shall be an interim stay of the proceedings by the tribunal appointed to investigate the conduct of lady justice Lucy Njoki Waithaka :as regards to the proceedings against the petitioner (Judge Lucy Njoki Waithaka) and such proceedings flowing from the tribunal appointment as notification gazette Notice No. 4851 of June 4,2019(special issue). “Ordered Judge Ongaya.

The judge further certified the application by the suspended judge as urgent.

This is after a four member committee formed by the Judicial Service Commission on May 8, this year, recommended that the judge be investigated over gross misconduct , breach of the constitution and breach of the judicial code of conduct.

The committee further recommended that a petition be submitted to the president for appointment of a tribunal to further investigate the petitioner’s conduct.

Lady Justice Lucy Njoki was the presiding Judge of Environment and Land court in Nyeri until her suspension on June 4, this year.

President Uhuru Kenyatta  appointed the tribunal to investigate the conduct of the judge on June 4, 2019 after a recommendation by the Judicial Service Commission set out in a report dated May 8,2019.

On July 31, 2013, judge Njoki commenced the hearing of a case identified as Jonathan Kimutai Mibei v Philip Kipyegon Lelei-Kericho ELC no. 64 of 2008 which was concluded on July 28,2014.

“Only the plaintiff in the case subsequently filed his submissions by September 25,2014 as directed by the court which thereafter set October 2014 as the date for judgement delivery.” Said the judge.

The court delivered judgement on October 29,2014 in an open court and thereafter signed the judgement as required by the provisions of order 21 rules 1 and 3(1) of the civil procedure rules.

The judge made the following orders:the plaintiff failed to prove , on a balance of probabilities, that the defedant had trespassed on the suit property and was thus not entitled to prayer of his plaint.

The plaintiff would however be granted prayer (b) of his plaint seeking an eviction order as the defedant had failed to prove to the satisfaction of the court that he had any lawful rights to the property.

The judge also ruled that the defedant also failed as the court found there was no valid contract of sale of the land between the two parties among other orders.

Since the judgement had some typographical errors, the judge retired to her chambers with the case file and gave it to a secretary at the Kericho law courts to amend the errors.  She was thereafter transferred to Nyeri law courts as the Presiding Judge of the environment and land court.

In June ,2015 the judge received a letter dated June 5, 2015 from deputy registrar High Court Kericho law courts , a letter erroneously dated July 5,2009 , albeit received by the registry on May 25,2015 from defendants advocate in the case in which the advocate on behalf of the client complained that he had been unable to access the court file for the case and the judgement delivered since the judgement date and that his client had been served with an eviction notice on May 20,2015 by the defendant which was very odd since his recollection based on information conveyed by the defendant who attended the pronouncement of judgement, the plaintiff’s suit had been dismissed.

The judge responded to Deputy Registrar letter and confirmed she delivered the judgement in the case on October 29,2014 and carried her file to Nakuru after judgement delivery.

She later learnt that judicial service commission met on January 26,2018 and delegated the hearing of the complaint to a committee consisting of four commissioners and JSC secretary.

The judge through Veteran lawyer Tom Macharia told the court the committee heard the complaint on March 20,2019 and April 8,2018  when it recorded evidence by the complaints advocate, Richard Kipkurui Tiongik , a witness for the complaint, The Kericho Law court courts executive officer, former registrar Kericho law court , the court clerk on duty when the judgement was delivered and the petitioner.

On May 8,this year, JSC delivered its decision in the form of a report in which it stated that it was satisfied , on a prima facie basis that a case of gross misconduct , breach of the constitution and breach of the judicial code of conduct had been disclosed against her and recommended that a petition be submitted to the president for appointment of a tribunal to further investigate the petitioner conduct.