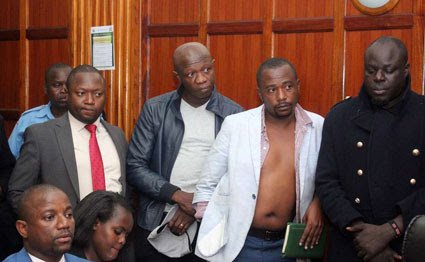 Four employees of Nairobi county were on Wednesday charged with creating disturbance.

The four were arrested on Tuesday at Integrity Centre, where they had accompanied Governor Mike Sonko for interrogation.

They were re-arrested immediately by plain clothes police officers, after they were released on bail.

The charges against them stated that on November 5, 2019 at about 11:00 am at EACC Integrity Centre in Upper Hill area in Nairobi county willfully and unlawfully they resisted arrest from police constables Peter Mwangi, Timothy Nyagah, Antony Kasili, Joseph Muturi and inspector Silas Siota.

Through lawyer George Kithi they asked to be released on reasonable bail terms saying that they are not a flight risk as they are employees of Nairobi county government.

The magistrate directed them to post cash bail of sh100,000 each, to secure their release.

The case will be mentioned on November 20 for pretrial.