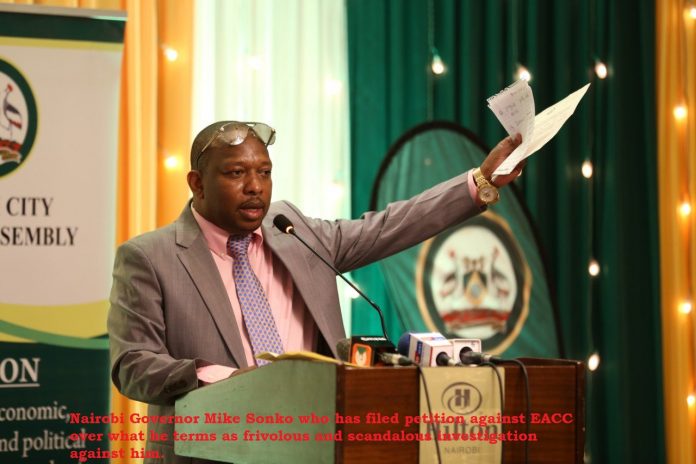 NAIROBI Governor Mike Mbuvi Sonko is on the offensive against the police and the Ethics and Anti-Corruption Commission (EACC) for deploying what he terms malicious, scandalous and petty investigations against him.

The flamboyant politician has petitioned the High Court to slam sanctions against the Ethics and Anti-Corruption Commission (EACC) for misusing their powers to cause physical, emotional and psychological harm to the very people they are supposed to protect.

The Governor said Director of Criminal Investigations, George Kinoti, the Director of Public Prosecutions, Noordin Haji, the National Police Service and the Independent Police Oversight Authority (IPOA) should investigate EACC and head of the agency investigation Abdi Mohammed since no other investigation agency is mandated to investigate them. He said he is ready to be investigated by any other agency.

In his constitutional suit, Sonko has pleaded for temporary orders to suspend the probe against him on the basis that the top State officials are likely to abuse their powers to influence adverse action against him without according him the opportunity to critique the allegations.

He said the state organs have demonstrated open bias, discrimination and unprofessionalism in investigating corruption and economic crimes. The top officials have been misusing intelligence reports from alleged whistle-blowers for personal enrichment, he claimed.

Sonko cried foul that the commission in collusion with the EACC boss and Head of Investigations, Abdi A. Mohamed, have instigated the arrest of innocent individuals allied to him and caused them to be prosecuted on frivolous claims. He admitted having had a long-running feud with the EACC and the DPP regarding unfounded allegations by purported whistle-blowers and recorded statements.

The politician said he had dutifully honoured summons by the EACC and Abdi and availed himself at Integrity Centre in Nairobi for interrogation. Almost all the allegations have been malicious since the agency is yet to finalize investigations and to forward the file to the DPP as required by law, he asserted.

The Governor has made five appearances at the commission’s headquarters within three months. He was summoned on July 30, August 27, September 22, October 28 and November 5.

He said his harassment was provoked by his hard-stance on corruption, especially Abdi’s involvement in the fraudulent transfer of Integrity Centre building and illegal sale of public utility land in Mugoya Estate. He said he personally reported the grabbing of the land to the EACC on May 27,2014 and ensured the residents of the estate kept pressure on Abdi to start investigations, which he did in August last year.

Sonko claimed that Abdi, his associates at the EACC, other public officers and influential private individuals were behind the fraudulent sale of Integrity Centre at an inflated price of Sh1.5billion so as to benefit from the proceeds.

He accused Abdi of orchestrating the transfer of the Investigating Officer more than three times in a span of two years without any justifiable cause so as to frustrate him and ensure that he kept off the matter. Abdi, he said, was capable of intimidating junior investigating officers under his command and influencing the outcome of investigations.

He said the commission had publicized the October 28 requiring him to appear at Integrity Centre on November 5 for questioning regarding failure to declare his past criminal record. This is when his supporters showed up in solidarity with his war on corruption.

On arrival at Integrity Cetre accompanied by his lawyer and County Attorney, his car was tear-gassed and his supporters were violently assaulted by armed policemen. There was no threat to warrant the use of force, he said.

He said officers acted under illegal instructions by mercilessly assaulting four individuals in his entourage causing them grievous bodily harm. The four are Kennedy Odhiambo Okoth, Richard Bosire, Joseph Kirai and John Abok and were charged with resisting arrest after they were denied P3 Forms.