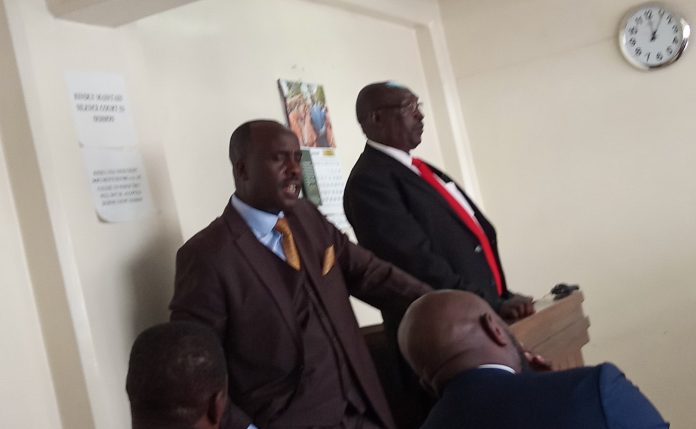 An uncle to Marianne Kitany has told a Nairobi court that Meru Senator Mithika Linturi produced a divorce certificate as an assurance that he did not in another marital relationship.

Andrew Chepkwony told the court that he and other elders called Linturi aside, before bequeathing their daughter to him, and asked him why he didn’t have a wife at his age.

“We called the senator to another room and asked him. At your age, you mean you’re not married? The senator went to his car and came with a divorce documents,” Chepkwony told Chief magistrate Peter Gesora.

Senator Linturi, he said, requested to pay the dowry in cash instead of the cows and sheep given as dowry. He said after negotiations Linturi chose to pay dowry in terms of money and gave out Sh100,000 in cash, after negotiations. He was answering questions paused by Kitany’s lawyer Dunstan Omari.

Chepkwony who took up the role of a father after the death of Kitany’s father, told the court that the Senator did marry their daughter in March 2016.

He refuted claims by Linturi that he did not marry her since he is married to another woman since he visited their home and carried out the necessary ceremonies of Nandi customary marriage.

The witness added that Linturi was accompanied by one Rufus Miriti who the master of ceremonies from Meru side and some other people whose names he could not remember.

The court heard when asked why the parents did accompany Linturi, he told Chepkwony that in Meru traditions, if a man is marrying for second time, he is not accompanied by his parents. Instead, he is accompanied by his age mates.

“After the negotiations and payment of dowry, we told him the girl was now his wife. We drunk fermented milk (mursik) as per Nandi traditions to cement the relationship,” Chepkwony added.

It was his testimony that Miriti later took out miraa (khat) and gave it to him. He then gave it to Kitany who chewed it and distributed to everyone at the ceremony including Linturi. This he said, he was told is according to Meru traditions as a sign of acceptance.

The uncle told the court that after the ceremony, Linturi gave Kitany’s mother a car (Nissan xtrail) as a gift and everyone at the ceremony witnessed it.

He further testified that he is shocked to hearing Linturi referring to Kitany as a visitor who had overstayed her visit since after the ceremony, she was his wife.

Chepkwony told the court that according to Nandi culture, if a couple separates and they had children the dowry will not be refunded dowry. But if the wife had children, the elders decided.

The hearing will continue on November 27.