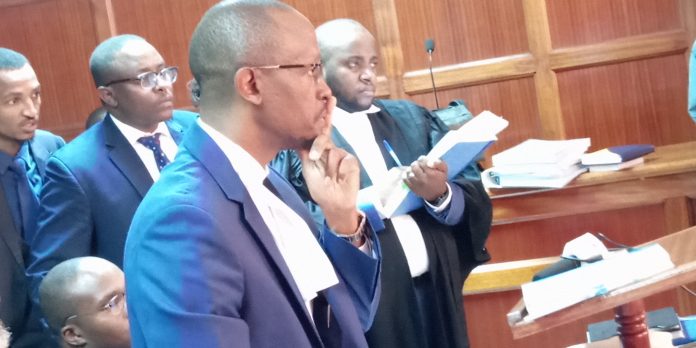 A petition filed by Nairobi Governor Mike Sonko failed on Thursday for the third time due to the absence of the presiding Judge.

The matter was placed before Judge John Onyiego for mention only to be informed that Judge Mumbi Ngugi had received an urgent call. The lawyers were told that the judge was bereaved.

Justice Onyiego however declined to issue conservatory orders and directed that the application be heard before Justice Ngugi on December 3.

The City boss wants pending the hearing and determination of the case, court to prohibit the Ethics and Anti-Corruption Commission and the agency director of investigations Abdi Mohammed from undertaking any or further investigations relating to him.

He wants the investigations to be transferred to another competent agency to undertake other than the Commission and Abdi.

“Pending the hearing and determination of the Petition Court does order the suspension of all the investigations by the EACC related to or against the Petitioner (Governor Mike Sonko)”, urged Sonko.

Governor Sonko is also seeking to bar EACC, DPP and Abdi either by themselves, their servants, or any persons or officers howsoever under their instruction, from arresting, holding, detaining, charging prosecuting him.

Through lawyer Cecil Miller, Sonko also urged the court in the event that he would have been arrested, the criminal proceedings or any such related proceedings against him be suspended and he be released forthwith.

Sonko told the court that, the commission and it officers has showed open bias, discrimination and unprofessionalism in the conduct of their investigative role in relation to corruption and economic crimes.

He said they have been illegally, selectively and discriminately pursuing investigations against him.

He accused the commission, it officials and the DPP of abusing their offices by serving partisan interests by initiating frivolous, unjustified, unwarranted and baseless allegations and complaints against those they wish to settle sources with and thereafter influencing the outcomes of the unwarranted investigations.

Lawyer Miller has urged the court to give an early hearing date, saying this was the third time the application had failed to be heard.

Sonko went on the offensive against the police and the Ethics and Anti-Corruption Commission (EACC) for deploying what he terms malicious, scandalous and petty investigations against him.

The flamboyant politician has petitioned the High Court to slam sanctions against the Ethics and Anti-Corruption Commission (EACC) for misusing their powers to cause physical, emotional and psychological harm to the very people they are supposed to protect.

The Governor said Director of Criminal Investigations, George Kinoti, the Director of Public Prosecutions, Noordin Haji, the National Police Service and the Independent Police Oversight Authority (IPOA) should investigate EACC and head of the agency investigation Abdi Mohammed since no other investigation agency is mandated to investigate them. He said he is ready to be investigated by any other agency.

In his constitutional suit, Sonko has pleaded for temporary orders to suspend the probe against him on the basis that the top State officials are likely to abuse their powers to influence adverse action against him without according him the opportunity to critique the allegations.