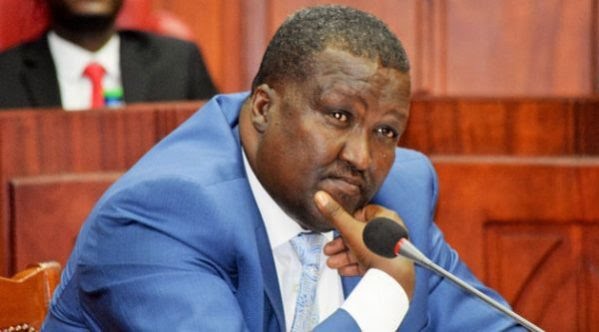 Lady Justice Hellen Wasilwa ordered the status quo be maintained in the office of Kenya Pipeline Company Managing Director pending the hearing and determination of the petition challenging his appointment.

This is after activist Okiyah Omtatah filed application under certificate of urgency seeking to be heard urgently and be heard ex parte.

“Pending the inter-partes hearing and determination of this application or the Petition herein the court be pleased to grant an order suspending the appointment of Macharia Irungu as the new Managing Director of the Kenya Pipeline Company (KPC) with effect from 2nd January 2020”, court documents states.

Omtatah urged the court to issue a temporary order prohibiting Kenya Pipeline Company Board and Petroleum and mining cabinet Secretary John Munyes or any person claiming to act under their authority from proceeding to give effect to the appointment of Macharia Irungu as the Managing Director of the Kenya Pipeline Company.

He is further seeking an interim order compelling the board and the Mining CS to produce the scoring sheets showing how each member on the panel ranked candidates, the scores awarded to each candidate by each member of the committee, and the criteria used in selecting the three shortlisted candidates.

According to a statement from the Petroleum and Mining Cabinet Secretary John Munyes, Irungu emerged the best applicant among other 88 applicants who were interviewed by the board of directors.

The appointment is faulted on the grounds of nepotism and favouritism contrary to the express provisions of Articles 73(2)(c) of the Constitution, which provides that, “The guiding principles of leadership and integrity include objectivity and impartiality in decision making, and in ensuring that decisions are not influenced by nepotism, favouritism, other improper motives or corrupt practices.” added Omtatah.

He said the KPC Board is tainted with unconstitutionality and illegality to the extent that five out of its nine members are from one tribe.

He added that the recruitment which has been carried out by the Board to fill the vacant position of the Managing Director of the Kenya Pipeline Company was conducted in contemptuous violation of very clear provisions of the Constitution and national legislation.

The public were not invited and were not given the opportunity to comment on shortlisted candidates and the times and venues of the interviews were not advertised or publicised in advance.

KPC board directors on July 19, 2019 invited suitably qualified candidates to apply for the post of Managing Director. The deadline for applications was 5.00 pm on August 2, 2019.  “No long list of applicants in the first advert was published.

However, in the Re-advertisement for the job which closed at 5.00 pm East African Time on Monday, October 14, 2019, it was claimed that “On scrutiny of the applications, the Board did not find an adequate number of qualified applicants to proceed to the next stage of interviews”, added Omtatah.

He said the claim does not hold water since, in the same breath, the allegation was contradicted by the call in the second advert that, “All those who had applied earlier need to re-apply.”.

He argued that if it was true that applicants to the first advert were not qualified, why ask them to engage in an exercise in futility by reapplying for the job they were not qualified for, instead of notifying them that they were incompetent and should not apply? asked Omtatah.

He questioned that, if no candidate in the previous recruitment exercise actually met the mandatory criterion set by the KPC board of directors, it is weird that it still was the respondent’s considered opinion that the said individuals were still eligible to apply for the job in the repeat recruitment process. Any reasonable and competent employer finding itself in such a predicament would re-advertise the position with an explicit proviso that previous unsuccessful candidates would not be eligible to apply.

“Failure to disclose the outcome of the first advert went against Article 35(3) of the Constitution on the right to access information as read together with Section 5 of the Access to Information Act, 2016 and the second advert was irregular and unlawful since the applicants of the first advert didn’t know what happened to their applications”, Omtatah said.

He said he reasonably suspects that, contrary to Article 73 of the Constitution, the decision to cancel the first recruitment process was influenced by nepotism, favouritism or other improper motives or corrupt practices, to the extent that the earlier recruitment exercise was abandoned not because it was not responsive but because a preferred candidate did not meet the minimum requirements.