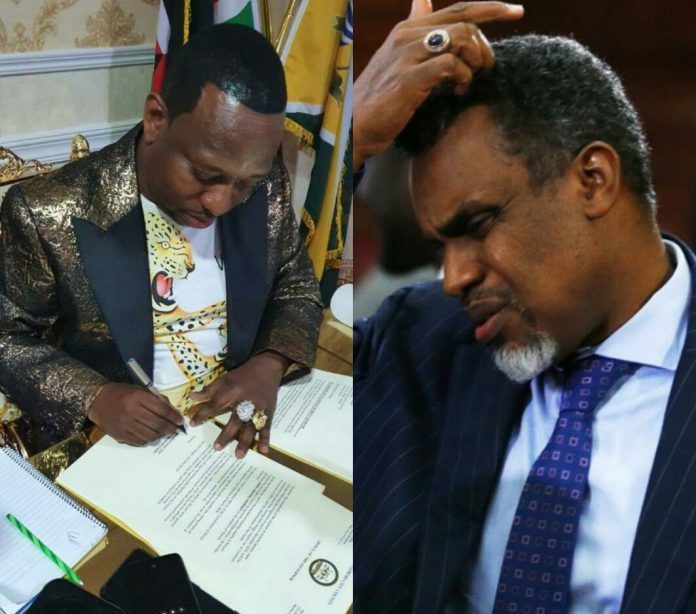 The Director of Public Prosecution has filed an application seeking  cancellation of Nairobi Governor Mike Sonko bail terms over his decision to nominate Anne Kananu Mwenda as the county deputy governor.

In the application, DPP Noordin Haji urged the Anti-Corruption Court to suspend the bail terms issued to the Governor pending hearing and determination of the application.

“This court be pleased to cancel the bail terms granted to Governor Mike Mbuvi Sonko for the reasons that he has unlawfully and in violation of the bail terms issued on December 11,2019 by accessing his office and nominating the Deputy Governor for the Nairobi County Government.”  Claims the DPP.

Haji, through senior assistant director of public prosecution Joseph Riungu, he said the trial court barred the Nairobi City Government officials or their agents from permitting or facilitating the Governor to access his government offices and urged the court to issue any other order.

The court last year released the city boss on a cash bail of 15 million and in the alternative of 30 million bond. He was also barred from accessing his office pending hearing and determination of the case.

The prosecution accused the Governor that on or about January 6, this year , in blatant and calculated disregard of the court order barring him from accessing his office, Sonko nominated his deputy with violation of his bond terms, accessed his office and nominated the deputy Governor.

“There is a real danger that the accused will interfere , intimidate and coerce the witnesses who are under his executive control , which will undermine the integrity of his trial. “Say’s Haji.

According to supporting affidavit filed by the Ethics and Anti-Corruption Commission (EACC) Investigator Idris Garane, says decision to nominate his deputy Governor is a clear indication that Governor Sonko continues  to access his office directly or indirectly through his agents and his actions are tantamount to a breach of the bail terms warranting review and setting aside of the orders admitting him on bail.

Garane said the act of nominating the deputy Governor and interaction with employees of Nairobi City County by the Governor amounts to an interference with the crime scene and prospective witnesses and will ultimately compromise the integrity of the trial.

He told the court the Governor has no respect for the court orders and has disregarded the clear directive given by the court.

” The acts of the Governor smacks of impunity and is calculated to intimidate and interfere with the witness based at Nairobi city county, a reason why this court had directed him to stay away from office until this case is heard and determined.” Say’s investigating officer Garane.

Kananu is the current Chief Officer in charge of Disaster Management and Coordination at City Hall.