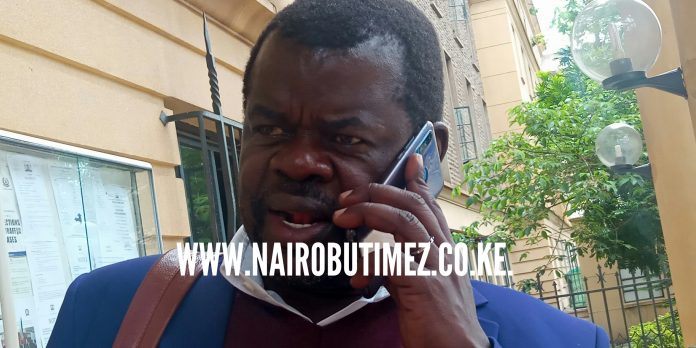 An activist has moved to court seeking an interim order prohibiting President Uhuru Kenyatta from extending the mandate and the term of the Presidential Taskforce on Building Bridges to Unity Advisory, which was appointed under Gazette Notice 5154 of May 31, 2018.

Okiyah Omtatah has also urged the court to issue an interim order restraining the Taskforce from continuing to undertake any of the activities stipulated in Gazette Notice 5154 of May 31, 2018 or any Gazette Notice seeking to extend and or vary the taskforce mandate.

Omtatah wants pending hearing and determination of the petition, the Court to issue order restraining the national executive of Kenya, The treasury and Attorney General and their agents from releasing any public funds to finance the activities of the Presidential Taskforce on Building Bridges to Unity Advisory.

He also wants an injunction restraining the President or any public officer, body, their agents or anyone else acting or purporting to act under the authority of any content prepared or produced by the Presidential Taskforce on Building Bridges to Unity Advisory notified through Gazette Notice No. 5154, published on May 31, 2018 and in particular on the basis of any content of the Taskforce Report titled Building Bridges to a United Kenya: From a nation of blood ties to a nation of ideals.

He argues that the petition raises a substantial question of law and seeks the file to be referred to the Chief Justice David Maraga for the empanelment of three bench or five judges to hear and determine it pursuant to Article 165(4) of the Constitution of Kenya, 2010.

In recent days, the pressure to gazette the decision to extend the mandate and tenure of the taskforce has mounted as political actors and State officers and other public officials have hit the road to campaign for the BBI, demanding that mid this year there must be a referendum to amend the Constitution through the unconstitutional process.

He opposes the decision to extend the mandate and tenure of the Presidential taskforce which was made in the media by the President on December 12, 2019, including through a post on his official website at http://www.president.go.ke/2019/12/12/president-kenyatta-extends-termof-bbi-taskforce/.

He says according to Paragraph 5 of the Building Bridges Initiative’s Terms of Reference, the Taskforce was due to present its comprehensive advice not later than 12 months from the date of its official launch.

Similarly, unless the President extended the period of the Taskforce before its initial term had expired, it was no longer open to the President to extend its period.

“Under its Terms of Reference, the Taskforce stood dissolved, incapable of being resurrected and given a new lease of life after the expiration date of the twelve months term after its official launch.” Say’s Omtatah .

The Presidential Taskforce on Building Bridges to Unity Advisory constitutes a grave attack on the basic structure of the Constitution as regards amending the Constitution through the popular initiative, and the petitioner is totally opposed to any extension of both its mandate and tenure as that constitutes not just a continuation but an expansion of the President’s disregard for constitutionalism, including for the rule of law.

In the court documents , Omtatah says though Article 257 of the Constitution clearly stipulates that the popular initiative of amending the Constitution must be initiated and be funded by a voter until the stage is reached where the IEBC takes over, upon ascertaining that the process is supported by signatures of at least one million voters, the President opted to violate that constitutional provision by using State resources to initiate and fund his popular initiative through the Presidential Taskforce on Building Bridges to Unity Advisory.

He adds that up until the delivery of the draft Bill and the supporting signatures to the IEBC, there cannot be any involvement of any state agency in the preparatory stages of any proposals to amend the Constitution by popular initiative.

Responsibility, including any financial liability required to meet the all requirements of Articles 257 (1) – (4), fall on and must be met by the individual or groups of individuals promoting the popular initiative. However, through the BBI Taskforce, the President opted to violate that constitutional provision by purporting to exercise non-existent powers of initiating a government-sponsored move to amend the Constitution through a popular initiative.

This is, amongst other reasons, a gross violation of the sacrosanct duty of trust owed by the President to the people of Kenya and a wanton waste of State resources to initiate and fund his popular initiative through the Presidential Taskforce on Building Bridges to Unity Advisory.

The Kenya Gazette Notice No. 5154 of May 24, 2019, advising about the appointment and the Terms of Reference of the Taskforce was issued in the name of Joseph Kinyua, Head of the Public Service and not in the name of the President of the Republic of Kenya.

Omtatah says that as a state officer, the President is under a strict constitutional and legal duty to only exercise power donated either directly by the Constitution or laws enacted under the Constitution. The President does not enjoy any inherent powers merely by dint of holding the office of the presidency.