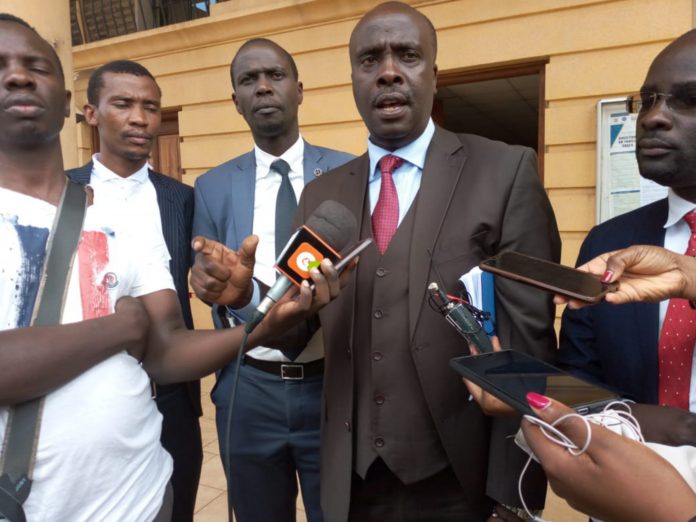 There is no where in law that judgement or ruling must be given to the DPP to approve before they are read.

Embakasi East Member of Parliament has moved to court seeking to restrain the DPP from making public comments on media stations, social media or any other form of public communication in relation to his case.

MP Paul Babiu Owino wants the DPP not to make any comments pending the hearing and determination of his case.

Through lawyers Danstan Omari, Duncan Okatch and Cliff Ombeta the MP argues that Haji is heard publicly, viciously attacking and delving into the merits of the ruling as rendered by Chief Magistrate Francis Andayi and as such prejudicing the applicant’s constitutional right of being presumed innocent until proven otherwise.

Omari reminded the DPP that no law requiring judges and magistrates to give him rulings and judgments before reading them.

“There is no where in law that judgement or ruling must be given to the DPP to approve before they are read.” Omari said.

Babu accuses Haji of being an inciter of the public in total disregard of his rights and the tenets of law and procedure when dissatisfied with the decision of the court.

Babu was admitted to bail of Sh 10 million to be paid in installments within three months, a ruling which the DPP says he has never heard of and would ‘revisit’.

“The DPP is clearly litigating the case in public yet this court is properly seized  of the matter and as such the same seeks to embarrass and ridicule the honourable court in the eyes of the public.” The MP argues.

According to his application under certificate of urgency, Haji’s actions are said to amount to a public persecution of Babu instead of the constitutional mandate of prosecution.

It is his argument that the DPP’s utterances jeopardises not only his constitutional rights but also the integrity of the court as an institution that is mandated  to protect the Rule of law and natural justice.

He wants the court to exercise its discretion in revision of the ruling by the Chief Magistrate Francis Andayi made on January, 27,2020 wherein the said Magistrate found that the prosecution had established that there were compelling reasons to deny the accused person bail or bond.

“The Court be pleased to review the terms set by the Court to be favorable and reasonable in line with the doctrine of presumption of innocence and thus also grant an option of bond.”Urged Babu.

He said the court failed to appreciate that there are no compelling reasons to deny the accused person bail or bond and instead factored in and / misapplied such factors and aspects in arriving at such a finding.

The MP said the Court failed to uphold the constitutional doctrine of presumption of innocence in its ruling and bail terms and shifted the burden of proof to the accused person in its determination of whether or not compelling reasons existed.

He added that reasons advanced by the prosecution were not sufficient to deny the accused bail or bound.

” In the interest of justice and fairness the Court do admit the Kenya Magistrates and Judges Association as an interested party as grave concerns have been raised by the Respondent that seek to interfere with the discretion of Magistrates and to an extent judges when dealing with such applications and thus a direct attack on the independence of the Judiciary as a whole.”Added Owino.