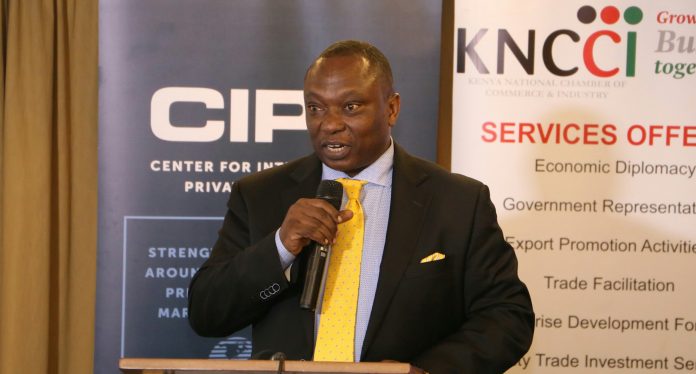 The Kenya National Chamber of Commerce and Industry (KNCCI) President Richard Ngatia has petitioned for the removal of a magistrate over the handling of an election dispute involving the chamber.

Ngatia wants the magistrate removed for giving an order stopping KNNCI from conducting the election of a chairperson of Women in Business Committee. The election was slated for January 24 at a city hotel.

He wants the magistrate to be investigated to ascertain whether she failed to discharge her duties in the interests of justice and was not impartial in discharging her duties, when she issued the order.

Further, Ngatia accused the magistrate of granting an order stopping the elections to replace Mary Nyachae. The case was set to be heard on February 4, 2020 but it was later overturned by the High Court.

Ngatia the court never took into account the preparations that had been put in place for the meeting and the elections including the travel arrangements for the delegates and their accommodations. He said the chamber had already made a deposit for the hotel booking.

He claims that from the onset, the dispute was not commercial in nature and the matter ought not to have been commenced before the commercial court. He said the magistrate did not have the jurisdiction to issue the orders.

“The court failed to ask the applicant to provide any security for the imminent costs incurred by the chamber in preparation for the said elections given that it was just three days to the elections and despite the advertisement having been done on January 13, 2020 the applicant chose to move to court just few days to the actual elections “, Ngatia says in the letter.

Ngatia argues that despite the foregoing, the magistrate went ahead to allocate herself the matter for inter parties hearing which obviously demonstrate personal interest in the matter.

He wants the JSC to find Murage guilty of misconduct and that she had personal interest in the matter and therefore there was a conflict of interest.

However the orders were set aside last Friday by Judge Msagha Mbogholi and allowed KNCCI president Richard Ngatia to conduct fresh elections.