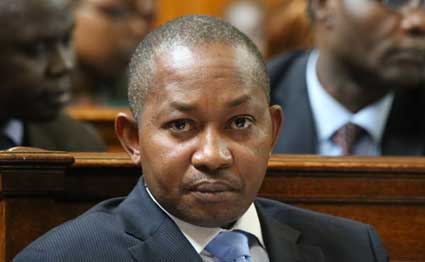 High Court has stopped the arrest and prosecution of former Law Society of Kenya chairman.

“There be a stay of proceedings in any criminal proceedings to be instituted against the petitioner in relation to his role in the conveyance involving sale of L.R No. 9918/3 and proceeds of sale thereof, pending hearing of this application inter parties”, ordered Korir.

This is after former law society of Kenya Eric Mutua filed a case under certificate of urgency seeking to stop DCI and DPP from charging him over the said transactions.

Mutua told the court that his law firm acted for Malili Ranch limited in the transaction relating to the sale of it’s land to the government and following to some misguided complaint by some members of the company, investigations were undertaken by the DCI and Ethnics and Anti-Corruption commission EACC.

Director of Public Prosecution appointed senior counsel Paul Muite to evaluate the available evidence and made appropriate finding and recommendations.

Mutua claim that the DPP upheld Muite’s findings to the effect that certain other persons be charged and Mutua be made state witness and he previously testified as prosecution witness in the criminal case involving the subject matter.

“The DPP cannot constitutionally resile from the decision it made unless circumstances change and new evidence is available and by purporting to return its own decision, DPP is in gross abuse of legal process and criminal justice system”, say’s Mutua.

He added that DPP decision has exposed him to double jeopardy and to the danger of self-incrimination thereby violating his right to fair hearing and he cannot be both an accused and a witness in the same subject matter.

He added that he received instructions on February 2,2009 from Malili Ranch limited to act for them following a tender advertised in the newspaper by the ministry of information and communication for purchase of 3000 acres of land and received a duly signed Board of Director resolution on the sale of 5000 acres of land of L.R No. 9918/3 or any other parcel owned by the company.

” Upon inquiry from client, it produced copies of shareholders to sell the land , which resolutions were passed in meetings held on May 7,2005 and January 5,2009 and pursuant to the said instructions, on February 3, 2009 I wrote a letter on behalf of our client offering to sell 15,000 acres of land at a sum of Ksh.298,000 per acre”, Mutua claim.

On February 20,2009 he received a letter from Chief Procurement officer in the ministry making a counter offer to buy 5000 acres at Kshs.200,000 per acre and asking that he accept the offer within 14days.

Several suspect are currently charged in connection with the loss of Ksh 1 billion in the sale of the 5,000-acre Malili Ranch.

They also pleaded not guilty to stealing of over 5 million shillings being the sale of the said ranch.

David Ndolo Ngilai a director of Malili Ranch was also charged with breach of trust.