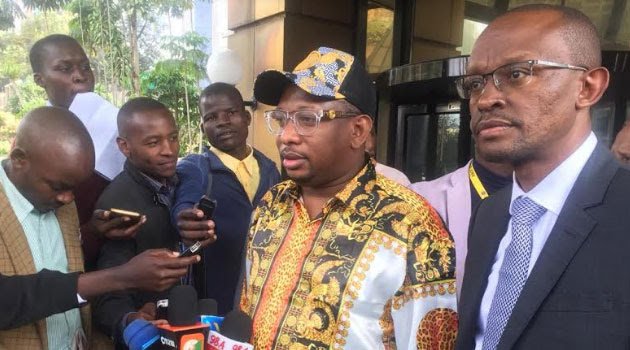 Nairobi Governor Mike Mbuvi Sonko has urged the court to dismiss application by Director of Public Prosecution Noordin Haji seeking to cancel his bail terms, for nominating a deputy governor.

The Governor vehemently denied allegations by the prosecution that his actions to nominate a deputy governor Anne Kananu Mwenda amounts in any way to interfering with the crime scene. He said he did not nominate the DG in his office at city hall or at a scene designated as the crime scene.

“I have fully obeyed and adhered to the set bail terms and purpose to do so until the hearing and determination of this case”, Sonko said.

While responding to the prosecution application, Sonko told the court that the bail conditions did not amount to, removing him or suspending him from performing his constitutional functions as the Governor of Nairobi County.

Through the Governor lawyer Cecil Miller, he stated that it would be unreasonable for the DPP to purport that the condition barred him from office is equivalent to his suspension, removal from office or to mean that the court barred him from completely exercising the constitutional and statutory functions of his office.

He said that since the ruling of December 11, 2019 where he was barred from his office, he has never interacted with the employees of Nairobi County or any witnesses.

Sonko added that his actions of nominating the deputy governor did not at all interfere with the evidence or any prospective witnesses.

He also added that the bail terms conditions issued against him by the trial court was to ensure that his relationship and any potential witnesses do not undermine the interest of justice and nothing has been alleged in the application that the trial court has been undermined or is threatened to be undermined whatsoever.

“On January 6, 2020, in exercising the constitutional duties of my office pursuant to Article 180(5) of the constitution, I did write to the speaker, Nairobi City County Assembly nominating a deputy governor and directing that the vetting process of nominee be undertaken pursuant to the provisions of section 8(1)(a) of the county Government Act 2013”, Sonko told the court.

The city boss further said that his decision to appoint the deputy governor does not in any way undermine his intended prosecution.

He further said performing such functions and enhancing service delivery to the public outweighs the contestation by the DPP in the high handed intention camouflaged and purportedly for public good.

He added that he is bound to perform his functions of the Governor which does not require his physical access to the office if the said functions can only be exercised by him as stipulated in the constitution and the county government Act of 2012 which provides that such functions are not to the extent that they breach the conditions set out in the bail terms.

“In fact, balancing public policy and public interest as while completing the fullness and intention of the constitution, more specifically the institution of Governor as intended by law and dedicated by the people of Kenya under Article 1, fulfilling the same cannot be equated to breach of law”, added the Governor.

He further said the reason for establishment of the deputy governor is to protect the public circumstances as those prevailing in the instant matter of Nairobi County.