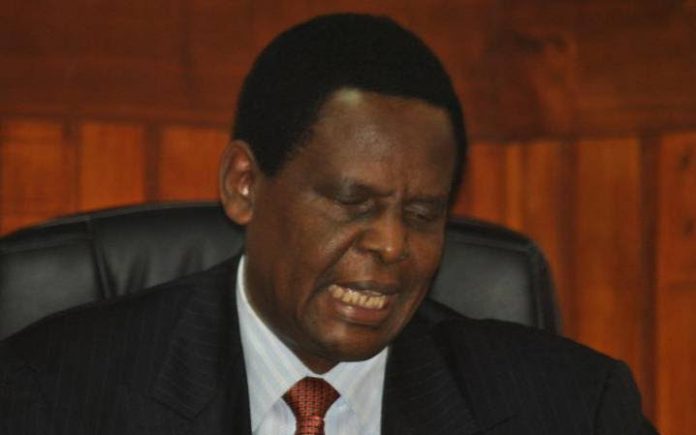 The Judge is aggrieved by the recommendation by a seven-member tribunal to President Uhuru Kenyatta to show him the door for offending the judicial code of conduct.

“Being dissatisfied with the decision or finding of the tribunal appointed to investigate into my conduct , delivered at Nairobi on March 17,2020, I intend to appeal to supreme court against the whole of the said decision or finding as decided that I was guilty of gross misconduct in respect of a delay in delivering reasons for my ruling dated May 30,2017 in Bomet HCCC No. 4 of 2016”, state the judge.

The tribunal, chaired by retired Appellate Judge Alnashir Visram, pronounced it’s adverse findings against the Judge on March 17. The team then handed it’s report and recommendation to the Head of State at State House Nairobi.

Veteran Nairobi lawyer Philip Nyachoti, who is representing the Judge, has formally filed the mandatory notice of Appeal in the Supreme Court registry in Nairobi.[25/03, 3:10 pm] Muhoho: The three-page document is to be served upon the tribunal’s secretary. The team conducted it’s hearings at the Kenyatta International Conference Centre in Nairobi.

The tribunal concluded that Justice Muya was guilty of gross misconduct by his delay in delivering reasons for his ruling dated May 30, 2017 in a civil suit while sitting in Bomet.

The Judge had justified his professional handling of the case, in which his decision has never been challenged in the Court of Appeal.

Nyachoti is expected to file an urgent application to the highest court in the land to forestall the sacking of the Judge before the appeal is heard and determined.

The Lead Assisting Counsel was Paul Nyamodi, assisted by Senior State Attorney Stella Munyi.
The judge argue that the Tribunal erred in law and in fact by finding that there was a valid Petition to the JSC for the purposes of the question of removing the judge from office and finding that the letter dated August 17, 2017 written by Onyikwa & Co. Advocates, on behalf of the NIC Bank (as it then was) to the Chief Justice and copied to the JSC constituted a Petition for his removal from Office.

He also say that the tribunal erred in law and in fact by finding that the misplacement of the court file in Bomet High Court Civil Suit No 4. of 2016; Alfred Kipkorir Mutai & Kipsigis Ltd V NIC Bank Limited did not violate the Appellant’s right to fair administrative action and fair hearing as enshrined under Articles 47 & 50 of the Constitution, whether before the JSC or before the Tribunal.

“Tribunal erred in law and in fact by finding that the JSC’s proceedings, and the consequent Report, Findings and Recommendation of the JSC met the required procedural threshold and safeguards applicable to that forum in respect of the Appellant and finding that the delay in the Appellant giving reasons for his Ruling dated May 30, 2017 was unjustifiable and inordinate and that the reasons given by the Appellant for the delay were neither sufficient nor credible or justifiable”, Nyachoti submit.

He accuses the tribunal for deviating from and failing to apply the correct standard of proof and the burden or onus of proof required in the proceedings of a Tribunal established under Article 168(5) of the Constitution of the Republic of Kenya.

He adds that t ribunal erred in law and in fact by venturing into and taking into consideration, the merits or otherwise of the Orders granted by the Appellant in Bomet High Court Civil Suit No 4. of 2016; Alfred Kipkorir Mutai & Kipsigis Ltd V NIC Bank Limited.

Judicial Service Commission chaired by Chief Justice David Maraga recommended the probe against the judge said after numerous adjournments, the judge granted injunction and reserved his reasons for a period of five months.
This was despite pleas by the bank that the vehicles, which was part of security were being sold occasioning the lender loss. The petition had disclosed bias, abuse of office , incompetence and gross misconduct in the manner in which the judge handled the matter.

In his petition filed in the high court, Justice Muya sought a stay of the report and findings of JSC dated May 8 recommending that the  report be presented to the President  to  appoint a tribunal to investigate into his conduct on  allegations  of gross misconduct.

The tribunal according to the  findings of JSC is to look into misbehavior, breach of the constitution, judicial code of conduct and  ethnics pursuant to the  complaint lodged by the law firm of Onynkwa and company advocates  on 17 August 2017 on behalf of NIC bank limited.

Lawyer Nyachoti  told the court that the presentation of the petition and subsequent appointment of the tribunal can take effect any  time now hence the  urgency of the  the application for conservatory orders.

He said the report and recommendation were  not made  available to the judge  until it was published in the media followed by several demands and the applicant was unable to file the suit timely.

The  judge  is aggrieved with  the report and recommendation on grounds  that the JSC exceeded its  jurisdiction by delving to the  merits of the  ruling the  subject of the complaint thereby usurping the appellate power that is contrary to the law and arrived  at  an illogical, irrational, unreasonable and erroneous conclusion.
Lawyer Nyachoti argued that the reports fundamentally flawed and incurably defective and wanting in validity as the  commissioners made reference to several issues that are separately to the  complaint.