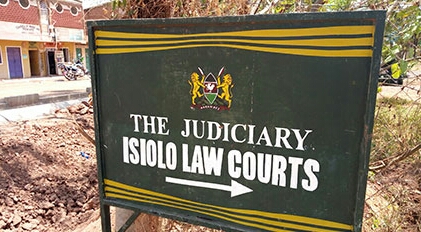 A senior education official who was facing charges of bribery over the recruitment of election officials in 2017 has suffered a blow after the High Court reinstated his case, one year after he was acquitted.

Salesa Adano Abudo had been acquitted by Isiolo chief magistrate S. M. Mungai in February 2018 after the case was adjourned several times but the Director of Public Prosecutions appealed.

The official was accused of influencing Justus Nzomo, the coordinator of Independent Electoral and Boundaries for Saku constituency for the 2017 general election, for him to appoint presiding officers.

“I hereby allow the application by reviewing, quashing and setting aside the trial court’s decision ordering termination of the charges against Salesa Adano Abudo on February 12, 2018,” Justice John Onyiego ordered.

The Judge ordered the trial to proceed before any other magistrate apart from CM Mungai.

The court said the hearing of the case should be speeded up without further delay.

While reinstating the charges, the judge said he was persuaded by DPP and EACC arguments and the orders sought were merited.

Adano was charged on July 25, 2013 before Isiolo court with two corruption related charges. He was accused on July 8, 2017 he promised to give Justus Nzomo the IEBC coordinator for Saku constituency in Marsabit county Sh200,000 as an inducement so as to appoint some persons he preferred to be appointed as presiding officers during general elections.

The prosecution said he knew that the acceptance of the promise would constitute improper performance of his duties.

He was released on a bond of Sh300,000 and cash bail of 200,000 pending hearing and determination of the corruption case.

The Magistrate had acquitted him over alleged endless failure to supply his defense with witness statement and exhibits.

The prosecution, the court noted, kept seeking adjournment arguing they were waiting for the directions from DPP. The defence applied for his acquittal for unnecessary delay.