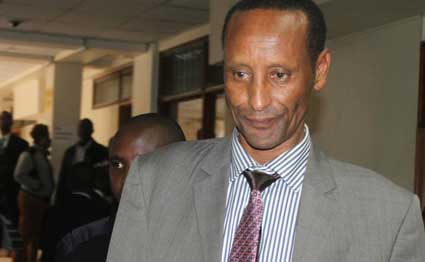 A charged former Chief Executive officer of the Kenya Meat Commission (KMC) has been ordered to refund Sh11.5 million to the agency.

This means Ethics and Ant-Corruption commission will recover 11.5 million public money alleged to be embezzled.

The KMC boss fraudulently and in breach of public trust withdrew the said amount for personal use. The court ordered him to refund the money with interest.

“The commission has proved its case on a balance of probability and judgment is thus entered in favour of the EACC against Dr Ibrahim Haji Issak for payment of Kshs. 11.5 million with interest at court rates with effect from April 30 ,2012 till full payments “, ruled the judge.

In the 42 page decision, Justice John Onyiego found that Dr Ibrahim Haji Isaak withdrew the money but failed to account for it.

“What that means, is that he dishonestly spent the money without proper accountability hence an act of fraud and breach of public duty. I have no doubt in my mind that the defendant failed to account for the public funds to which he was duty bound to refund to the corporation,” the Judge said.

The court ordered him to refund the money with interest at court rates from 2012. Ethics and Anti-Corruption Commission told the court that Dr Isaak was the joint signatory to its account at First Community Bank.

In 2012, he went to the bank and presented a letter requesting the withdrawal of the money. And withdrawing the money, he failed to account for it.

But in defence, the former CEO said he withdrew the money to pay suppliers because canned meat was need urgently.

He also defended himself saying he was never a custodian of the accounting documents and in the absence of the substantive board, the organisation’s day to day operations still proceeded without a hindrance.

Evidence presented in court showed that the money was paid to three livestock suppliers and EACC said the former CEO did not attach any documentary proof that he indeed spent the money for the intended purpose with the laid down procedure.

Ocharo submitted that cash purchases were only allowed where suppliers were reluctant to supply, owing to outstanding debts which was not the case. She added that his dishonest expenditure without accountability constituted fraud and breach of public duty.

According to the commission, the withdrawal was made purportedly on behalf of KMC but which funds were later used for private gains as no receipts of accounts have been tendered.

The commission further he deliberately deceived KMC and the public by withdrawing monies so as to secure the unfair and unlawful gain.