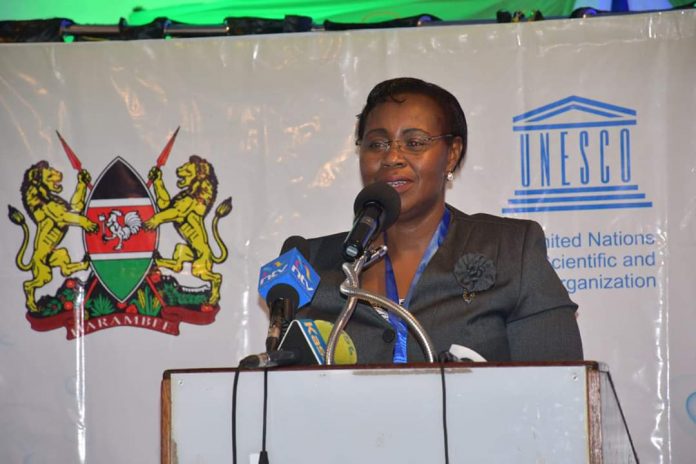 “A declaration be hereby issued that UNESCO secretary general Dr Evangeline Njoka is unfit to hold any public office by dint of the violations of the constitution and Leadership and Integrity Act,” he urges the court.

Through his lawyer Danstan Omari, Ocharo also wants the petition and court orders be served to Dr Njoka electronically and the matter be heard expendidously during Covid-19 period.

The CEO has been accused of breaching recruitment procedures by breaking down a system that is likely to have ramifications on the way the public views the organization.

He further doubts its ability to attract high caliber professionals who will be motivated to seek employment.

This is because of internal hemorrhage of staff in senior management who have resigned or are fighting for their rights through the courts in the last two years, a situation he said is alarming and warrants immediate intervention.

According to the court documents, Dr Njoka has acted and continues acting in a manner that completely flouts the provisions of law on conflict of interest thus putting the commission on a downward path and in contravention of the dictates of Articles 75 of the Constitution of Kenya 2010 and Section 24 of the Leadership and Integrity Act.

On September 17, 2019, he said, after uproars from the public were raised over bribery allegations and complaints against the Dr Njoka and three other officials of the Commission, she convened a board meeting which recommended the suspension of the three officers, pending investigation into possible offenses, disregarding the fact that she was also part of the allegations.

The Commission sought legal advice from the Attorney General over the matter and in response, was advised that the board is possess legal authority to take disciplinary action against its staff.

However, such action can only be based on the existence of conclusive evidence subject to reference and applicability of the Human Resource Manuals, fair administrative Action and adherence to the Rules of Natural justice, the AG advised.

Dr Njoka is said to have kept intimidating the officers, members of the board engaged in witch-hunt and misappropriation of funds all constituting gross misconduct that warrants removal from office.

Ocharo says that the increased number of court cases that have all been deliberated upon by the board are indicative of an incompetent CEO who is incapable or resolving simple labour related issues but geared at supporting the unlawful decisions of the CEO.

Ocharo through lawyer Omari says that Dr. Njoka was appointed to the position for a term of five years which was renewed for another five years in 2018 without disclosing to the Board that she was due for mandatory retirement upon attainment of 60 years from June 3, 2020.

According to Ocharo,  the recruitment for a position of a CEO ought to be competitive which in her case, was only but an appointment from the Cabinet Secretary, Ministry of Education at that time.

“It is during her reign as the CEO that the Commission now stands accused of arbitrarily engaging in a myriad of unlawful actions. It is also noteworthy that during her second reign that is now dogged in controversy, the shift in carrying out the Commission’s mandate has drastically changed and veered towards succession politics”, he adds.

In the court documents, Ocharo says unfortunately, the CEO is aggravating the situation by adamantly working to have the officers dismissed and not reinstated as she may try to show from time to time.

He argue that contrary to the organizational mission which refers to implementing the mandate for purposes of “promoting peace for sustainable development”, Dr. Njoka has declared war on her staff. This atmosphere is likely to interfere with the issuance of quality services to a now curious public who are concerned about the state of affairs at the Commission.

He also says that the breach of recruitment procedures are also indicative of a broken system that is likely to have ramifications on the way the public views the organization and the ability to attract high calibre professionals who will be motivated to seek employment and the level of internal hemorrhage, within the last two years, of staff in senior management who has resigned or are fighting for their rights through the courts is alarming and warrants immediate intervention.

He states that the genesis of this downhill trend was the review of human resource instruments, which were undertaken between May and August 2019, in line with a government directive.

“Sadly, Dr. Njoka took advantage of the directive to institute a series of confounding measures which included overseeing the abolishing of critical positions contrary to the Public Service Commission (PSC) Guidelines of 2015 on establishment and abolition of offices and during the review process, some staff expressed their reservations about the structure and abolition of the offices, something that was not taken well by the CEO”, says Ocharo.