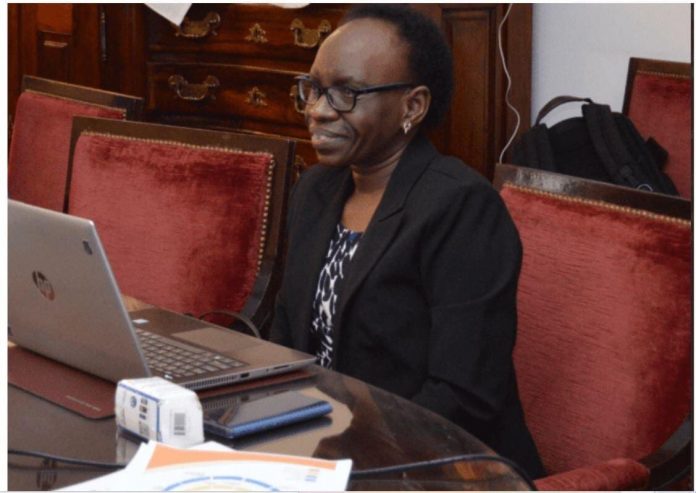 Activist Okiya Omtatah has gone back to the High court seeking to quash a shortlist of candidates submitted for the vacant position of Auditor General.

And although President Kenyatta has already nominated Nancy Janet Kabui Gathungu to the position and awaiting approval by Parliament, Omtatah reckons that the candidates cannot be eligible a few months after they were rejected.

He wants the court to suspend the process, pending the determination of the case.

If approved by the National Assembly, Ms Gathungu will replace Edward Ouko at the of the Office of the Auditor General and become the second holder of the office since the promlugation of the new constitution.

In a statement released by State house spokesperson Kanze Dena, Ms Gathungu was the first among the top three candidates presented to the President for nomination by the recruitment panel.

In his court documents, Omtatah says the matter is extremely urgent since the interviews took place on June 3 and 3, 2020, and the names of the candidates, as anticipated, forwarded to President Kenyatta.

“These proceedings relate to the patent objection by the ex-parte applicant to the ultra vires decision made by the selection panel to shortlist persons who were interviewed in October-December 2019 and declared unqualified for the position by the predecessor interview panel,” adds Omtatah.

The position was advertised afresh after 17 shortlisted candidates failed to reach the threshold for the final shortlist for appointment.

Only two candidates in the shortlist were added from the initial candidates. They are Benson Ochieng Okundi and Paul Wangila Masinde.

According to the activist, if the selection panel selects the two new candidates, the third will have to be someone who was determined unqualified for appointment just a few months ago.

He said it was clear that the selection panel will be unable to lawfully recommend to the President three names from the interviewees who are qualified.

In the earlier case, Omtatah said the opinion of that selection panel, the candidates were unable, both in the written job application submitted for the position and in face-to-face interview, to demonstrate that they were people of high moral character, integrity, impartiality, tact, independence and diplomacy.

“Given that these qualities can only be acquired and demonstrated over many years, especially, for the purposes of the job at hand, during a person’s previous jobs and other experiences, it is simply untenable and a fiction to claim that these character traits could have been acquired and genuinely demonstrated, with integrity and honesty, over a period of less than six months,” adds Omtatah.

He further states that the current selection panel does not have jurisdiction to sit on appeal over decisions of the former panel.

He claims that the failed candidates whose names appear above were all interviewed in October and December 2019 and declared unqualified for the position by the interview panel. “They cannot therefore be eligible a few months later,”

He argues that further, for the purposes of carrying out the interviews for the position of the Auditor General, the Selection Panel was required to hold the proceedings in public but it did not.

Further and in particular, the invitation to the public was omitted in the notification to the shortlisted interview candidates and the general public of the date, time and venue of the interviews.

Even with the COVID-19 restrictions, there is no justification for failing to hold the interviews in public. The Selection Panel could have allowed the proceedings to be broadcast, either by third party media houses or even by a nominee of the Selection Panel. There are currently plenty of options for live-streaming any proceedings on the Internet. At the very least, this is what the Selection Panel should have done to comply with the strict duty imposed by the Constitution and the Public Audit Act.

Locking the public and the media out of the interviews was fatal to the recruitment process because it was done in in complete disregard of the specific requirements for transparency and accountability in Articles 10 (2)(c) and 232(1)(f) the Constitution, and the express provision at Section 11(5) of the Public Audit Act that “the selection panel shall hold its proceedings in public”.