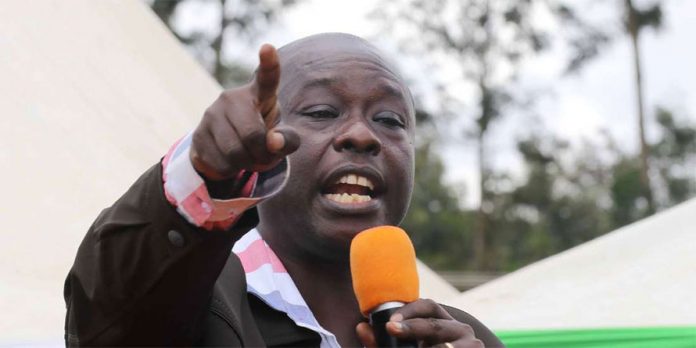 The government through the Asset Recovery Agency is seeking to preserve over Sh200.773 million held in his three accounts.

The MP within seven years received Sh5.8 billion which included funds from companies or business entities which had received funds from government ministries, agencies and county governments during the period of investigations.

One account has Sh165 million, Sh35,million and another Sh773,228.33 thousand all held at Rafiki Finance Bank in the name of Rigathi Gachagua.

The agency also seeks to  preserve and prohibit Jenne Enterprises Limited from dealing in any manner whatsoever with Kshs. 1,138,142.95 million held in it name at the Rafiki Microfinance bank.

“The court do issue preservation orders prohibiting Rigathi Gachagua and Jenne Enterprises limited , their employees, agents, servants or any other persons acting on their behalf from transacting , withdrawing , transferring and dealing in any manner howsoever in respect of any profits or profits derived or accrued from the funds specified,” the asset agency prays.

The agency opened an inquiry to investigate and subsequently applied for and was issued with warrants to investigate the suspects account vide miscellaneous criminal application No. 1275 of 2020 and preliminary investigations established that Gachagua and Jenne Enterprises limited were involved in suspected complex scheme of money laundering involving several companies which initially received funds from government ministries and state agencies and later transferred the funds to companies or businesses entities associated with Gachagua and ultimately transferred the funds to the Gachagua personal accounts.

The agency claim that on diverse dates between May 2013 to May 2020, Gachagua personal accounts at Rafiki Microfinance bank received suspicious funds amounting to Kshs. 5,832,671,354.19 billion which included funds received from companies or business entities which had received funds from government ministries, agencies and county governments during the period of investigations.

In the same period of seven years, an account operated by the MP at Rafiki Microfinance bank as a collection account where suspicious funds were received from the companies or businesses entities which had received funds from government ministries, agencies and county governments.

“That within the said period there were massive suspicious cash withdrawals, transfers, inter and intra bank transfers from other accounts to the accounts under investigations and other bank accounts owned by Gachagua in suspicious complex money laundering schemes”, says the agency.

The recovery agency further states that part of the suspect funds received from the government ministries, government agencies and county government were later transferred to two accounts numbers which are fixed deposit accounts in his name with total Kshs. 200,000,000 million at Rafiki Microfinance bank.

” There are reasonable grounds to believe that the suspects bank accounts were used to conduit of money laundering in efforts to conceal , disguise the nature, source , disposition and movement of the illicit funds and should be preserved “, agency told the court.

The agency said unless the court  issues the orders sought , Gachagua and Jenne Enterprises limited are likely to withdraw or transfer the funds and thereby benefit from proceeds of crime contrary to the law.