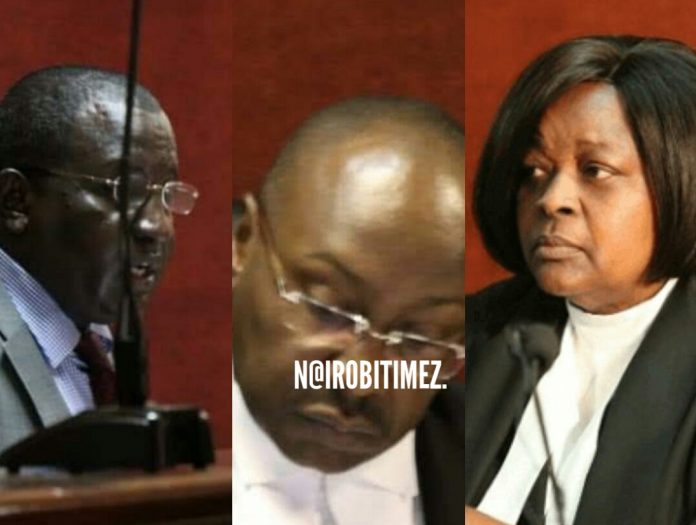 Activist Okiya Omtatah now wants the court to compel President Uhuru Kenyatta to present the names of 41 judges forwarded to him by Judicial Service Commission to Parliament for appointment.

In a petition, Omtatah wants the Employment and Labour Relations court to compel President Kenyatta to immediately present names to the national assembly. The names were forwarded to President Kenyatta in August last year, but he has refused to formally appoint them sparking a row between him and Chief Justice David Maraga.

Omtatah also wants the court to make declaration that President Kenyatta is under constitution obligated to present the names recommended for appointment as judges.

He is seeking a declaration that the labour court has exclusive jurisdiction over all disputes concerning the recruitment and appointment or employment of all state officers including judges of the superior courts.

The activist has accused the President of administrative failure by failing to act, a move he says contravenes the bill of rights to the extent that it violates articles 47 (I) of the constitution which provides that every person has the right to administrative action that is expeditious, efficient, lawful, reasonable and procedurally fair.

He also claims that the President’s failure violates article 129 of the constitution on the principles of executive authority which provides that executive authority derives from the people of Kenya and shall be exercised in accordance with the constitution and in a manner compatible with the principle of service to the people of Kenya and for their well-being and benefits.

Omtata adds that the president has no room to make the appointment in an opaque and unaccountable manner by side stepping Parliament which represents that people through their representative and must have a say in the appointment of the judges.

Omtata is aggrieved that close to one year later since the JSC recommended the 41 names for appointment as judges of the superior court, the President has failed or refused and/or neglected to present them to the national assembly for vetting and approval for appointment as required by law.

He also says that the appointment by the President of state officers such as that of judges in issue is not an event and a mere formality, it is an obligatory detailed and hallowed process involving the vetting and approval of prospective appointees by the national assembly.

“It is my case that the president has failed to act within reasonable time in the performance of a critical constitutional function as required by the constitution,” claims omtata

He further states that a judge of a superior court is a public officer classified by the constitution as a ‘state office’.

Omtata says that under the constitution, the appointment of a judge is an ordinary employment process because the office is a state office whose remuneration is a direct charge from consolidated fun