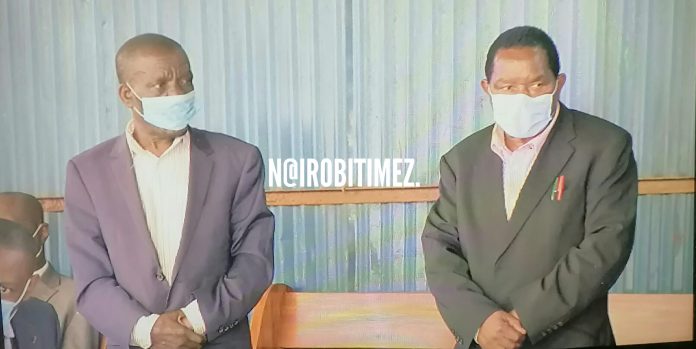 Two top officials among them, a former National Industrial Training Authority board chairman have been charged with unlawful acquisition of public funds and misuse of office.

Prof Ekamais, a former chairman at NITA was accused of unlawfully acquiring Kshs1,681,534 as allowance for meetings he did not attend and visits he failed to take.

Okiomera is accused that between July 2013 and February 2014  at the National Industry Training Authority offices in Nairobi, being the accountant in charge of NITA, used his office to improperly confer himself benefit of Kshs1,681,534.00 as allowance to Prof Ekamais.

The court heard that he authorized the payment of the said amount without the requisite supporting documents.

Gitaka is accused that between July 2013 to February 2014 at the NITA offices in Nairobi being acting director general and the accounting officer of the agency, he used his office to improperly confer a benefit of Kshs1,314,618.00 to Prof Ekamais.

The charge sheet stated that he authorized payment for the said amount of money without the requisite supporting documents.

Further, the prosecution accused Prof Ekamais that between September 6 to 20, 2013 offices in Nairobi, being the chairman of the board knowingly gave to his principal NITA board a false taxi receipt for motor vehicle KBQ 620B showing that he had purportedly incurred taxi expenses of Kshs3,000 from Eldoret Airport to Kenmasa hotel an act which was to the detriment of his said principal.

Prof Ekamais is also charged with knowingly giving his principal another taxi receipt showing that he had purportedly incurred taxi expenses of Kshs 10,000 from Eldoret to Nairobi an act which was to the detriment to the organization.

The case will be mentioned on July 29.