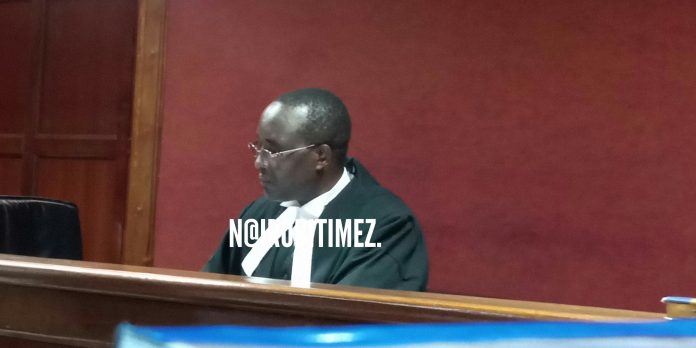 The judge ruled that the risky of lifting of the preservation orders as sought by Abdi is higher the hardship to be suffered by the Asset recovery agency which in any event is short lived as the money is save pending expiry of the 90 days since gazettement or institution of forfeiture proceeding which must be proved on a balance of probability and at this stage the businessman property is save hence no cause of worry.

“It is my holding that the respondent (Ali Abdi Ibrahim) has not proved to satisfaction of the that the impugned orders should be rescinded or reviewed. Accordingly, application is dismissed” ruled Judge Onyiego.

The Anti-Corruption court Judge further ruled that the society legitimate expectation that the courts shall reasonably balance individual interests with public interest which in any event is superior unless proved the preservation application is extremely malicious founded on bad faith and amounts to an abuse of power or court process.

Judge Onyiego said although Ali Abdi Ibrahim claimed that the money in the account was being used for family survival and for running his businesses, the same was subject to litigation, which if proved can be forfeited to the government.

He added that Ali did not state how much on average his family required for daily upkeep so as to persuade the court and he did not also tell court whether the money in the account is the only source of income he has a reason that did not convince the judge to lift the orders obtained by the agency.

The Judge said it will defeat the very purpose of preservation orders if the court were to release the money unless, purely on humanitarian grounds that the funds are the only source of income relied by the family.

He also said the orders were obtained through falsehoods because there was nothing linking him to illegal activities. He said the contracts he secured with the County government of Mandera were lawful and he was doing legitimate business.

But Assets Recovery Agency (ARA) said most of the funds loaned on Islamic Sharia or Somalia culture or from contracts and sub-contracts relating to construction works at Mandera county government.

The accounts were frozen in April ARA flagged them down saying they suspect that the man was laundering money.

Justice Daniel Ogembo issued the orders following an application by Assets Recovery Agency (ARA). The agency filed the application suspecting that the funds were paid by companies being investigated for receiving fraudulent payments from the Mandera county government.

An analysis by ARA showed that two of the accounts held at Equity Bank, Mandera branch, belonging to Ali Abdi Ibrahim, received a total of Sh124,750,000 from the various companies under investigations. The funds were later withdrawn or transferred to other accounts in a scheme of money laundering.

Between 2014 and 2020, Ibrahim allegedly made suspicious cash withdrawals and transfers in split transactions to evade the reporting threshold.

Justice Ogembo granted the orders stopping the withdrawal or transfer of the funds in the two accounts, pending the hearing of the case. One of the accounts hold Sh39.6 million while the other has Sh3.8 million.

“The bank accounts received suspicious huge cash deposits in Kenya shillings and the funds are suspected to be stolen and or fraudulently acquired from Mandera County Government by the Respondent, his agents or representatives and deceitfully deposited and transferred from the above accounts,” reads an affidavit of Fredrick Musyoki

The officer said investigations revealed that the cash deposits were unlawfully acquired hence proceeds of crime or that there are reasonable grounds to believe that the accounts are used as conduits of money laundering.

The officer had on March 20 obtained an order from a magistrate to investigate the two accounts. Musyoki said he later discovered that the payments were made by about seven companies being investigated for receiving funds from Mandera county government.

Investigations later revealed that he received money from several companies being investigated for receiving fraudulent payment from the county.