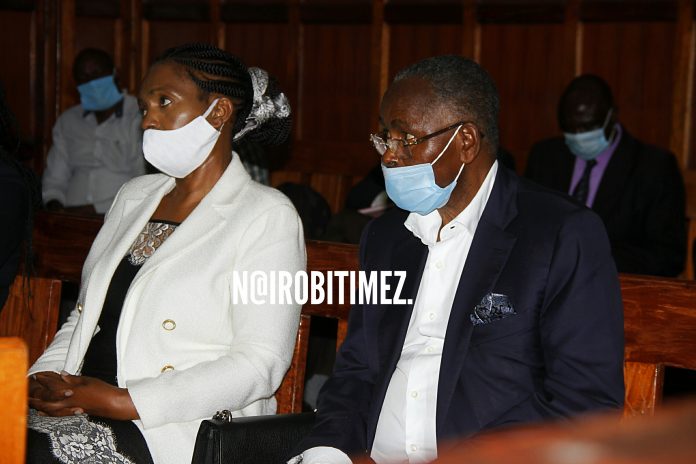 Keroche Breweries CEO Tabitha Karanja has accused Director of Public Prosecutions Noordin Haji of leaving out crucial information regarding the death of her daughter Tecra Muigai.

In an affidavit filed in court, Karanja further said it was curious for Haji to override DCI George Kinoti’s decision for the inquest to be held in Nairobi in contravention of provisions of section 386 of Criminal Procedure Code which vests primary responsibility into the institution and the conduct of the inquest in the national police service and the nearest magistrate.

She added that her daughter died at Nairobi hospital in Nairobi and the nearest court is Milimani Magistrate court which should conduct the inquest over her daughter’s death.

Karanja further told the court that she complained to DCI Kinoti when it appeared to her that the death of her daughter was to be treated as a mishap or accidental death.

She also claim that the medical reports shows that her daughter was a victim of a cold murder and was subjected to a severe trauma by a blunt object and fractured the most secured bones in the human body.

Tabitha still questions why DPP changed his mind after exercising his power to withdraw a murder charge against Lali Omar and recommend the inquest. Yesterday Haji claimed there was no sufficient evidence to charge the suspect with the murder and dismissed claims he has interests in the matter.

She further wants the DPP to explain the reason why in flush and instant of thought, he changed his mind suddenly and whether his decision must be reasonable, rationale , lawful and for the public interests.

“My family are victim of the heinous crime of murder of our child and Director of Public Prosecution has acted curiously and capriciously without regard to our pain, suffering and vulnerability”, added Tecra mother.

The family further said that twenty four witnesses are based in Nairobi and four in Lamu.

The family wants Haji to appoint an independent prosecutor to handle an inquest into the death of their daughter Patricia Tecra Muigai.

Through the mother Tabitha Karanja, the family said after the withdrawal of the charges against Omar Lali, they lost confidence in the DPP. She said Noor should, therefore cease from the matter and appoint an independent prosecutor to handle the case going forward.

The family further opposes DPP’s plan to transfer the inquest from Milimani magistrate court to Lamu. “We oppose the request by the DPP to withdraw the current inquest proceedings from this honourable court,” Karanja said.

She said the decision to withdraw the inquest from Nairobi came as an extreme shock to the family and the move by DPP was whimsical and arbitrary.

“That family of the deceased finds it hard to believe that it is a mere coincidence that there has been the foregoing flip-flopping on the part of the Director of Public Prosecutions evidenced by a decision to charge the key suspect with murder at Garsen Law Courts, followed by a near simultaneous recall of the said decision and the decision to institute the present inquest proceedings at Milimani Law Courts followed by a near simultaneous decision to withdraw the said inquest proceedings from the said courts,” she said.

She said the family no longer has confidence in the DPP handling the matter in strict compliance with the dictates of the constitution and the law.

Karanja said the conduct of the DPP has left the family with many unanswered questions on what extrinsic interest that the DPP may have in the matter.