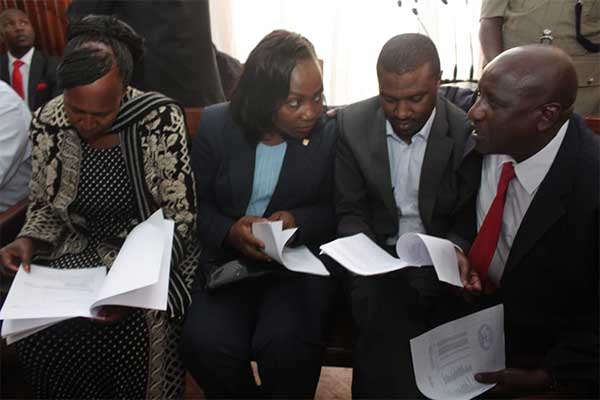 It has now emerged that Director of Public Prosecution Noordin Haji withdrew graft charges against JamboPay bosses, despite overwhelming evidence.

In a compromise, the DPP entered a deal with Webtribe limited, which trades as Jambopay together with Robert Muriithi Muna and CEO Danson Muchemi, to turn them into witnesses as opposed to charging them over the loss of Sh1.1 billion at the National Hospital Insurance Fund (NHIF).

But it emerges that Directorate of Criminal Investigations George Kinoti had gathered enough evidence against the duo over the scam. The decision to withdraw the case is a huge blow to investigators and efforts they put in the matter and it is believed that the entire case might collapse.

The agreement does not state whether the firm or its directors will refund the Sh 1.1 billion that they received from the fund being taxpayers’ money.

Further, investigations revealed that the deputy procurement officer was instructed to prepare a procurement plan specifically for the item which upon consultation with ICT general manager, arrived at an estimated cost of Sh30 million.

“To the contrary, NHIF with the assistance of the evaluation committee, tender committee and with approval of the CEO awarded the contract to MS Webtribe at a cost of Sh49,513,440.00 million inclusive of taxes being one off payment and commission on transactions banks collections, mobile money collections, electronic cards collection and agency Network collection at four percent each,” revealed the investigations.

Investigators said the actual value of the contract awarded could not be estimated and by the time the contract expired on June 30, 2017, Webtribe had ripped off the institution over Sh1 billion in commissions noting that the company was only offering a platform (system) that would relay information on transactions conducted by NHIF and therefore it did not make logic for them to get commissions on what the system was expected to do.

The DCI also established that the said contract entered between Webtribe limited and NHIF on August 15, 2014 had a three years lifeline and was to expire on June 30, 2017.

However, on August 25, 2017 two months after the contract had expired, NHIF CEO Geoffrey Mwangi aided by the head of procurement Pamela Marendi made two extensions of six months each, thereby extending it by one year during which Webtribe limited fraudulently benefited from commissions of Sh.226,157,936.

It was further found that Webtribe did not fulfill the terms of the contract as per the expected deliverables as undermentioned which would have enabled NHIF to manage the system operations on their own. It also emerged that the company never provided NHIF with a webserver for which they were paid Sh3,500,000 and never provided NHIF with Point of Service Terminals (P.O.S) for which they were paid Sh16,000,000.

After completing investigations, the investigation team forwarded the duplicate inquiry file to the DPP on November 19,2018 vide DCI letter Ref. DCi/IB/SEC./4/3/1/VOL.III/151 where Haji in consideration of the evidence presented before him directed the eighteen others, Webtribe limited, Danson Muchemi and Robert Muna to be with fraudulent acquisition of public property.

Due to the fact that Webtribe through IMSS had acquired crucial transaction records and NHIF members’ data and immediate termination of the services without an alternative would cripple the operations of the funds, prosecution applied for an order barring Webtribe from interfering with IMSS until the matter was heard and determined.

Trial magistrate Douglas Ogoti had on December 11, 2018 barred the company from interfering with IMSS.

Attempts by the company and its bosses  to set aside orders by the trial court in the High Court flopped and later they resorted to threatening NHIF with imminent disruption of services through numerous correspondents to the fund payment was not made to them as a result of the continuation of services.

While withdrawing the charges, prosecution stated that “That pursuant to lawful compromise between the DPP and the directors of WebTribe, the court does grant a pardon to the office of prosecution as enslaved by section 5(1) of the Anti-Corruption and Economic Crime Act. That consequence thereto Muriithi and Muchemi be freed and or discharged as accused persons in this case and or any other case arising from the same or similar fact,”.

The DPP has urged the charges withdrawn under section 87(a) of the Criminal Procedural Code (CPC) on grounds that they give evidence against their co-accused persons surrounding the award of the contract of revenue collection at NHIF.

In a letter by Alexander Muteti on behalf of DPP, Murithii and Muchemi have now agreed to be prosecution witnesses although they illegally received millions of taxpayers’ money from the national health insurer.

According to the letter the duo were made prosecution witnesses on condition they avail them and their employees to testify in the case against their co-accused persons.

However, a non-governmental organization, Global Legal Action Network, has now written to the Ethics and Anti-Corruption Commission (EACC) over the move by DPP to drop charges against Muriithi and Muchemi.

The NGO now wants EACC to take action and ensure the Jambo Pay bosses face the law over the financial scandal. The letter was copied to the National Assembly and Public Service Commission.

On the other hand activist Okiya Omtatah has since sued the DPP for allegedly encroaching on the mandate of the National Police Service.

Other than drawing the boundary between the mandates of the two institutions, the activist has petitioned the High Court to guidelines recently published by the DPP titled, “Guidelines on the Decision to Charge, 2019”.

“A declaration be made that Section 5(2)(b) & (3) of the Office of the Director of Public Prosecutions Act No. 2 of 2013 is unconstitutional and therefore, invalid, null and void,” he said.

Omtatah further wants the constitutional court to declare that the principal decision to charge or not to charge a suspect with a crime and registering such a charge in court is the culmination of and an integral part of the investigative process and it is strictly the exclusive mandate of the Police.

According to Omtatah, the DPP’s mandate to institute and undertake criminal proceedings commences only where a charge is contested but the DPP, he said does not have any mandate in the criminal investigation process and has no capacity in law to call for police files before formal charges are laid in a court.

He further seeks that the court to declare that the DPP’s practice of endorsing or approving miscellaneous criminal applications made by the police, including police applications for custodial periods to hold suspects for further investigations, before the applications are filed in court, is unconstitutional.

Omtatah wants the court to rule that the DPP has no capacity in law to endorse charge sheets before they are registered in court and he does not have any powers or role to play in drawing, signing and presenting a charge sheet in court.

“A declaration be made that to be binding, any subsidiary legislation purporting to set out the exercise of the powers and functions of the DPP must be published in the Kenya Gazette before they become effective,” he said.