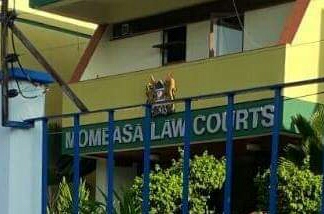 A Mombasa court has directed the police in Makupa to remove a businessman from a disputed property in the coastal town, pending the determination of the long-running case pitting a woman and her relatives.

Principal magistrate Lesootia Saitabau directed the officers at Makupa Police station to verse the removal of Jeylani Omari Abu from the property along Tom Mboya Avenue in Mombasa.

“That temporary injunction is restraining the 5th defendant ( Abu) whether acting by themselves, servants, agents or any person acting on their account from interfering, trespassing, encroaching carrying out groundwork’s, building constructing, staying or interfering in anyway with the plaintiff’s property,” the court ruled.

Documents filed in court showed that Shamsha Abdulrahman Bin Miran is the sole surviving daughter of Abdulahman Miran, who died on March 16, 1976 leaving behind a will that was registered in court.

Pursuant to the will, and a succession case, Shamsha was named the beneficiary of the estate, including the land in Mombasa.

She said in 2011, her nephew and niece, Asha Abdalla Abdulrahman a Miran and Mohamed Abdalla respectively, moved to the High Court in Mombasa, alleging the Miran died without a will and that they were the only surviving heirs to the estate.

They also purported to distribute Miran’s other properties among themselves.

They also filed a death certificate to support the grant of letters to administer the estate in March 2012. The grant was confirmed on November 1, 2012, stipulating the modality of sharing the property.

The property was transferred to their names but she has written to the police to investigate the forgeries of the death certificate.

When she discovered the move, Shamsha moved to court seeking to quash the grant and in August 2015, the High Court issued an order restraining the two from wasting or disposing the property.

The parties later recorded a consent in court in October 2018, revoking the grant on the grounds that it was procured through fraud and concealment of facts.

The property in contention was later transferred to Mohamed Adam for Sh10 million.

Last year, Adam allegedly transferred the property to Abu. Shamsha said she had filed a complaint of forgery before the Makupa Police station way back in 2015 but no action has been taken for the past five years.

She later lodged a caveat with the Chief Land’s registrar, while the case was pending in court.

Shamsha is seeking a permanent injunction, barring them from laying claim on the property and for the court to declare them trespassers.

She also wants the court to restore the property to the estate of Miran and she be compensated for damages. This was after the new owners demolished a building on the property and started new construction.

“The defendants have since refused to vacate from the property, albeit incessant pleas for negotiations and demands and notice of intention to sue continue to waste my land,” she said in an affidavit.