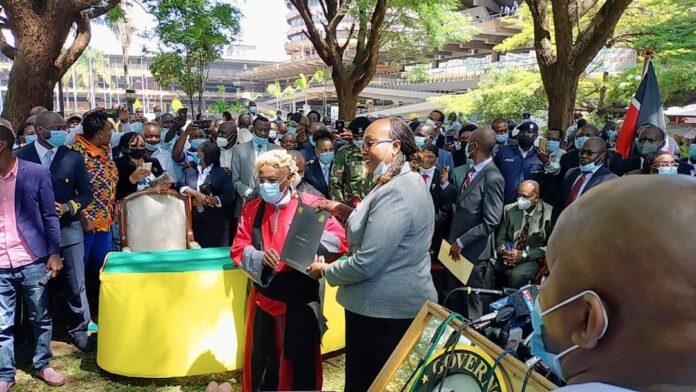 Lawyers have criticised the hurried manner in which Nairobi Deputy Governor Anne Kananu Mwenda was vetted and sworn into office on Friday.

Moreso, the lawyers took a swipe on the Judiciary and High Court Judge Anthony Mrima for his ruling dismissing cases seeking to block Kananu’s vetting.

Justice John Mativo, who presided over the swearing in at KICC grounds was also criticised for taking part in what they termed as a constitutional coup.

In a post on Facebook, lawyer Omwanza Ombati questioned how a Judge was on standby to swear in Kananu a few minutes after vetting and approval by the county assembly.

“The whole charade brings disrepute to the judiciary, that compounded by the fact that there was another judge on stand by, on a minutes notice to swear in Anne Kananu as Deputy governor.

“Just to demonstrate, when the Speaker (Mutura) was initially meant to be sworn to act, a judge refused to swear him because he first had to ascertain whether he had a degree certificate and secondly refused because the swearing was slated beyond the time set out in law (2 pm) so what changed today? He posed.

“Who was behind this JUDICIAL SCAM? The office of the DCJ or the Office of the Chief Registrar of the Judiciary? Ahmednasir asked.

Ahmednasir wondered if the Acting CJ Mwilu wasn’t aware of the swearing in, who then authorised the judge who conducted the ceremony?

“Did the judge satisfy himself that the acting CJ authorised the ceremony he conducted? Do we now have PRO and ANTI-handshake JUDGES in the Judiciary? He posed.

Ahmednasir further posed another question What is JUDICIAL IMPUNITY?

“When judges SYNCHRONISE THE INTERPRETATION of the CONSTITUTION/LAW to the express POLITICAL DESIRES/GOALS of Govt and Was today’s decision by Mrima J in KANANU CASE one of JUDICIAL IMPUNITY? YES, It’s a classic case of JUDICIAL Impunity. he added.

Omwanza said that the interpretation by Justice Mrima of the constitutional court was clearly a road that was cut and curved to the very end.

“Eurprisingly (Mrima J) acknowledged in his ruling that it was possible for Anne Kananu to end up as governor, from the path he had allowed, however he said that this can be corrected at the end (not true other than through a fresh election petition) because both disputants were right in their arguments”, he said in a tweet.

“An actual High Court Judge, (robbed and wigged) who has taken an oath to defend the constitution was available or at standby and at moments notice; through executive fiat to swear Anne Kananu as Deputy Governor of Nairobi”, he added.

Omwanza termed the whole episode as incredibly absurd and violates the constitution and Assumption of Office Act.

“Obviously the judge was aware or ought to have been aware of this. This is equivalent to a judge swearing an individual who vide a coup detat assumes office of the President! But there was no gun barrel pointed towards the judges head”, he added.

He said the action by judge amounted to gross misconduct and violation of the constitution. i.e The swearing in was not in public and neither Gazetted.

He added that the individual was not vetted properly in accordance with the law, there was no public participation and the heightened expedition was meant to defeat lawful processes and the intent of the constitution.

He further said that they shall end up with Kananu assuming office of Governor, not by election, but through judicial craft, then she shall appoint a deputy, not through elections but through judicial craft to govern Nairobi as appointees of someone we do not know and therefore without constitutional authority to govern Nairobi. Whichever way you look at it, looks like quantum physics without a formula.

“The coincidences are simply incredible” he added.

Senator Kipchumba Murkomen while replying to Ahmednasir tweet he was shocked by judge Mrima decision especially because it is indefensible and violates all the rules of interpretation including logic and he fear for our Judiciary.

Law Society of Kenya president Nelson Havi said he would like the ideal petitioner to challenge the fraud swearing in.

“Problem is that deep State will appoint a Lawyer to take over and withdraw the petition as soon as it is filed”, he added.

Another lawyer Steve Ogolla said that Kananu cannot lawfully assume office of Governor because at the time the ousted Mike Sonko impeachment, she was not the substantive Deputy and cannot therefore lawfully serve as Deputy under the Governor-elect because the law permits Governor-elect to nominate own Deputy.

He added that Nairobi County Assembly cannot lawfully vet and approve her as the Deputy Governor.

“It is an unconstitutional maneuver lacking in merit and seriousness”, He added.

Lawyer Waikwa Wanyoike who worked with Katiba Institute said the move by the Assembly to Vet and approve Kananu as the DG was having blessings from president Uhuru Kenyatta and opposition leader Raila Odinga.

“Let it be on record that what Nairobi County Assembly has done in vetting and approving Anne Kananu as DG and obviously making her governor – with the urging of Uhuru and Raila – is a constitutional coup”, said Waikwa.