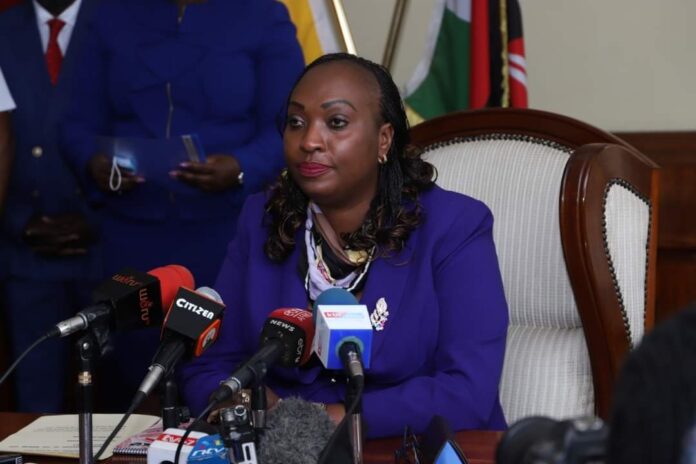 The High Court has stopped the intended swearing-in of Deputy Governor Anne Kananu Mwenda as the Nairobi County boss.

Justice Antony Mrima issued the conservatory orders, restraining the swearing-in of Kananu after the Law Society of Kenya (LSK) challenged her vetting and approval last week.

“A temporary injunction is hereby issued restraining the respondents, their agents or servants from swearing in Anne Kananu Mwenda as the Governor of Nairobi City County Governments pending hearing of the application”, ordered the judge.

The judge said he issued orders pending appointment of a bench the Chief Justice to hear and determine the matter.

This is LSK moved to court seeking orders to suspend the decision by the County Assembly made on January 15 2021 approving the nomination of Anne Kananu Mwenda as the Deputy Governor of Nairobi City County.

“A conservatory order be issued suspending the decision of the County Assembly made on January 15, 2021 approving the nomination of Anne Kananu Mwenda as the Deputy Governor of Nairobi City County pending hearing and determination of the petition “, urged LSK.

Through Omwanza Ombati , LSK argued that the hurried vetting and approval of Kananu as the Deputy Governor and her eventual swearing in was unconstitutional and a calculated political move to avoid a by-election in Nairobi.

The Nairobi governor’s position fell vacant after Mike Mbuvi Sonko was impeached by the County Assembly and the decision endorsed by Senate.

The County Speaker Benson Mutura was made the acting governor, pending the election of the substantive holder.

But Kananu was hurriedly vetted and sworn in in a process that took about five hours. Wanyama said the state actions on Friday undermines the right of the people of Nairobi to elect a Governor and Deputy Governor of their choice. He added the acts also sets a dangerous precedent in the application of the rule of law.

“That this swearing in is problematic, unconstitutional and a brazen attempt to undermine the process of a by-election as anticipated in Article 182(5) of the Constitution of Kenya,” says LSK.

He said the county government was likely to proceed to commit further acts of illegalities by swearing in Kananu as the Governor of Nairobi City County who will in turn nominate yet another person for appointment as Deputy Governor.

It is the LSK’s argument that at the point of the vacancy occurring at the office of the Governor, there was no deputy governor to assume the office of the governor for the remainder of the term as prescribed in Article 182 (2) of the Constitution.

“The provisions of 32D of the County Governments Act 2012 as read with section 4 of the Public Appointments (County Assemblies Approval) Act, No. 5 of 2017 require that after vetting and approval of Anne Kananu Mwenda for the position of Deputy Governor, a formal appointment by the Governor shall be made. This appointment shall be in writing and made under a county public seal, a County Government symbol is provided for at section 4 of the County Government Act, 2012. Thereafter, a public oath of office is administered,” says LSK in the court papers.

LSK said it was not possible for Kananu to be sworn into office as Deputy Governor without the formal statutory appointment.