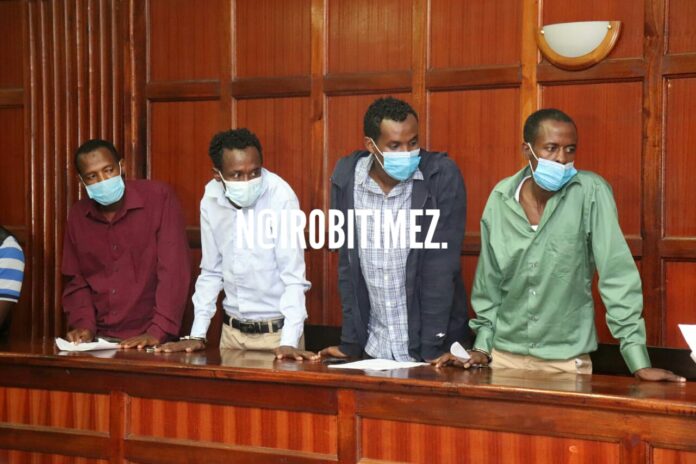 Two Marsabit County employees and two Ethiopians were yesterday charged in a Nairobi court with illegal possession of a firearm and 10 rounds of ammunition.

The four suspects Galma Jara, Musa Dalacha, Mohammed Galmagar, and Ibrahim Abduba Galma appeared before Milimani Chief Magistrate Martha Mutuku and denied the charges. It is alleged that they were in possession of an AK-47, 10 bullets with a license.  Jara and Musa further denied charges of being in Kenya illegally.

Galmagar and Galma, a county government driver and mechanic respectively, were arrested on February 6, by the Border Patrol Unit at Elle Bor area in Turbi, Marsabit County.

The two Ethiopians pleaded guilty for being in Kenya illegally but denied the other charges.

The four allegedly committed the offence on February 6, 2021 at Ele Borr area in Turbi Sub County within Marsabit.

The arrest of the four suspects led to the manhunt for a Marsabit MCA who police alleged was linked to arms dealing suspected to have been used to fuel inter-ethnic clashes in the Turbi and Sololo areas.

The MCA later surrendered to authorities this month and was transferred to Nairobi for interrogation by the Anti-Terror Police Unit.

The prosecution is opposed to the release of the two Ethiopians on bail on grounds that they don’t have a fixed residence and are likely not to attend court proceedings.

In an affidavit filed in court by Anti-terrorism Police Unit officer Michael Bundi they want two Ethiopian men be detained pending the hearing and determination of the case. The officer said the two were likely to flee the country, if released on bail.

Mutuku directed the hearing of the bail application to be heard in a different court.