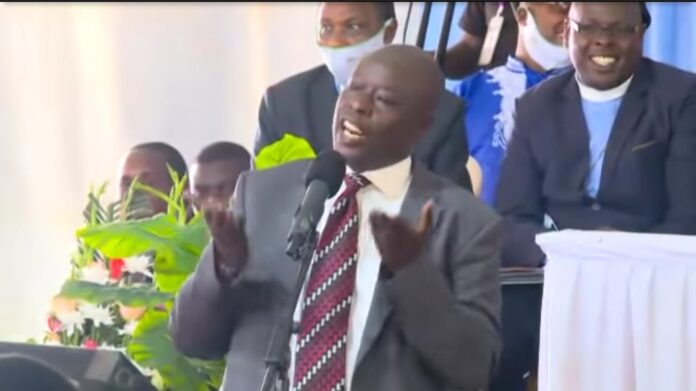 Mathira Member of Parliament Rigathi Gachagua has asked the High Court to dismiss a case challenging his ownership of a piece of land in Nairobi.

Gachagua says his company, Wamunyoro Investment Limited bought the said piece of land known as LR No. 209/12077, I.R 90923 from Karandi Farm Limited, Peter Nduati Mbugua and Pauline Muringe in June 2012 and obtained a genuine title deed from the lands office.

Through lawyer Philip Nyachoti, he says he bought the land for Sh24 million and later charged the title to Equity Bank and obtained a loan.

The MP has been sued by John Michael Ohas, a retired civil servant who used to work at the ministry of Lands and his company Columbus Two Thousand limited.

“The applicants’ application is frivolous, grossly misplaced, gravely misconceived, fatally and incurably defective and therefore an abuse of the court process,” states the MP.

Through lawyer Nyachoti, Gachagua says the land was allowed to Karandi Ltd 30th April 1999, who paid Sh554,000 for acceptance.

The couple and their company later obtained a certificate of title for the parcel of Mombasa Road in Industrial Area.

He adds that the couple later approached Wamunyoro Investment with the intention of selling the property and they consequently carried out due diligence and was able to confirm that their certificate of title was authentic.

“Following the completion of the exercise, the 6th respondent purchased the suit property for valuable consideration from the 3rd, 4th and 5th respondents in the sum of Sh 24 million and thereafter a transfer was effected in its favour and a title deed issued.” says the MP.

Gachagua says he has been paying land rates to the Nairobi county government for the said land to date.

Further the MP said Ohas filed a complaint before the National Land Commission in January 2016, claiming that the, which he acquired in 1994, had been invaded by squatters.

Ohas, he said, said the government evicted the squatters sometime in 2012 and with a view of developing the property, he visited it and discovered it had been fenced off by someone claiming ownership.

He said he investigated and found out that the title deed had been issued to another person without his knowledge.

In his complaint, Ohas said he believed the issuance of the title to another person in disregard of his interests was illegal because he had prior rights which ought to have been given precedence.

In the end, the commission found that the property was procedurally allocated to Mbugua, Muringe and Karandi limited and later transferred it to Wamunyoro.

On the other hand, Columbus 2000 was unable to produce the original letter of allotment or a receipt showing that they had accepted the offer or paid for the allotment.

“It is instrumental to state that one of the conditions for allocation is acceptance of the offer of allocation and payment of all statutory payments including stand premium of Sh 692,000 and annual rent of Sh 138,400 within 30 days of the postmark,” ruled the commission.

According to the commission, Ohas did not demonstrate that he accepted and made the requisite statutory payments to the government.

“This may explain why they were not issued with the grant and no title was registered in their name,” he said.

The MP said that he has been informed by their lawyer that since the said decision was delivered on 24th March 2016, Ohas has never taken any steps to review, set aside or appeal the decision.

Gachagua states that the commission sits as a tribunal exercising quasi-judicial authority and therefore merits of its decision cannot be reopened and or interrogated by the Directorate of Criminal Investigations since the law had not designated the DCI as an appellate body of over the decisions of the commission.

He says the attempts by the DCI to exercise such powers as set out in the applicant’s affidavit is illegal and unconstitutional since it is the mandate of the High Court and the Court of Appeal .