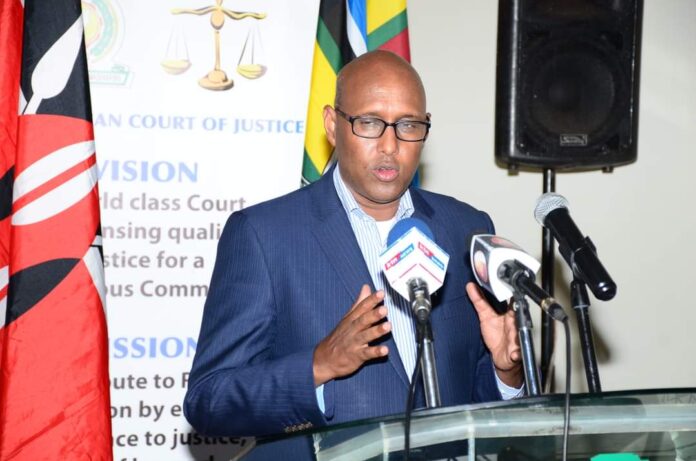 The CS who was speaking in Nairobi during the end of five days induction for newly appointed judges of EACJ said the court’s jurisprudence has served as a guiding light for national courts as well as other courts around the world.

“Despite the Court’s jurisdiction being initially limited to the interpretation and application of the EAC Treaty, the Court has not been deterred from creatively making pronouncements on other crucial matters like respect for the rule of law and human rights,” he said.

The CS added that the Court has continued to strengthen the rule of law and development of human rights standards by boldly denouncing human rights violations.

He assured the judges that Kenya has been keenly following the jurisprudence developed from the EACJ and the contribution of the Court is fundamental in facilitating the achievement of integration objectives of the Community.

Adan said the court has judicial independence to facilitate and discharge its functions. “Ours is to continue to provide support to the Court to undertake its mandate,” he said.

“I am also aware that you have been taken through various topics of interests by Judges such as the procedures in the First Instance division and the Appellate Division, the jurisprudence of the EACJ Decisions and many more. I am happy that now the Court can resume its sessions now that it is fully constituted, “added Adan.

The 20 years old court was inaugurated in 2001 while the Treaty is more than 20 years old.

Adan said that he was aware there are some implementation challenges in the Treaty and there is need to amend it to align it with reality and more so, to ensure the independence of the Court to enable it to play its role in the integration of the Community.

According to the CS, no regional integration can succeed without a strong Court as it is the only organ that will interpret the Treaty, give advisory opinions to the Council of Ministers and give guidance where there is inconsistency in the implementation of the Treaty or in the Protocols. It is therefore a very important organ that cannot be ignored in our integration agenda.

He acknowledge the crucial role that the Courts play in resolving disputes within the Community, upholding and safeguarding the aspirations of the Community’s founders and its citizens as expressed in the Treaty, which is a living document that continues to live by the Court’s pronouncements.

The Court’s new President Justice Nestor Kayobera said the five day induction was very productive to the newly appointed judges and they were confident that they were very equipped with sufficient knowledge, experience in the functions of the court and ready to put them into practice.

He added that the court has utilized technology to deliver justice during the current pandemic but court needs strong technology to work effectively.