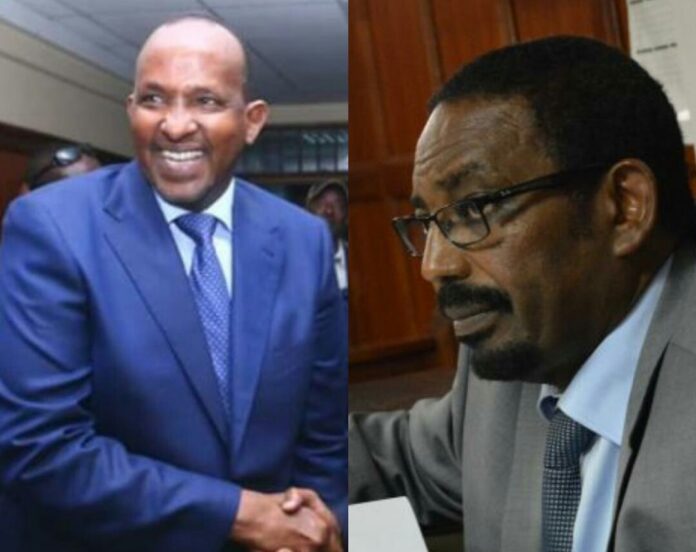 Three years ago the then powerful Majority in the National Assembly and Garissa Member of Parliament Aden Duale secured a major victory against former deputy speaker Farah Maalim.

Maalim had filed a petition before the High Court challenging the veteran politician and biter rival’s election as Garissa Town Member of Parliament.

However, On February 27, 2018 Judge Hedwig Ong’udi ruled that Duale was validly elected and claims that some voters were denied a chance to vote, were untrue.

The judge dismissed Maalim’s case saying there was no proof of voter bribery and improper transmission of results as claimed.

While welcoming the court’s decision, Duale said It was proven beyond reasonable doubt that the will of the people of Garissa had been upheld by the court.

Maalim attempted to overturn the High Court’s decision but the appeal too, came a proper.

Maalim felt that he could not contain the heat in an appeal he lodged contesting the affirmation of Duale as his MP and was forced to file a notice seeking to withdraw the appeal he filed before the Appellate Court.

“Take notice that the Appellant herein, Honorable Farah Maalim, hereby withdraws the appeal, for all purposes” reads the notice of appeal.

The then Leader of majority in the National Assembly had urged the appellate court to strike out a notice of appeal filed by his opponent Farah Maalim dismissed with cost.

During the hearing of the Petition, Duale told the court that he was re-elected because of his good development record in his constituency.

Duale said that even opposition supporters supported him instead of Maalim.

The vocal politician said that even NASA supporters in the region voted for him and dismissed claims that he bribed voters in the area.

He also refuted claims made saying the election was free and fair and was done in accordance with the constitution.

The outspoken politician said that the High court decision of 2018 gave him humble time to work for the people of Garissa Town and entire country.

Speaking to Nairobi times the Garissa MP said that Justice Hedwig Ong’undi ruling that affirmed his election after dismissing a petition filed by his political nemesis Farah Maalim for lacking sufficient evidence enabled him work for him constituency and the people of Kenya.

“I will continue fighting for the interests of people of Garissa Township and entire Garissa County both locally and nationally to ensure they get their share of the national cake like other counties,” added Duale.

“Certainly, public participation as a process should in my view be one that helps the House to make an informed decision on whether to pass or reject the Bill that is before this House,” said Duale.