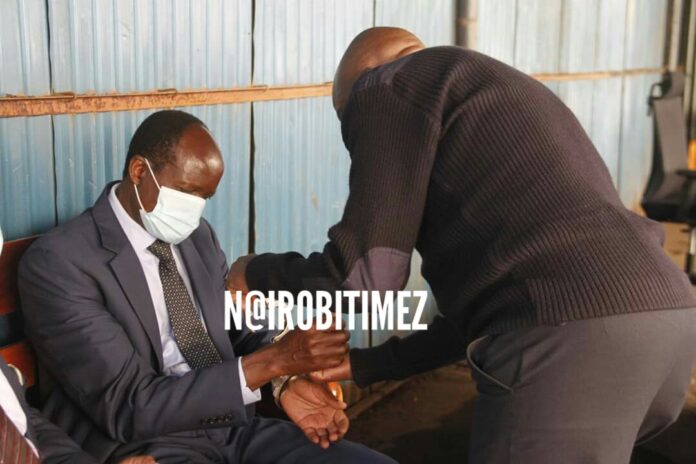 Migori governor Okoth Obado and his relatives has suffered a major blow after Anti-Corruption Court barred them from selling property bought by the money considered to be proceeds crime.

High Court issued orders temporarily barring the Governor and his relatives from selling a house in Loresho, pending the determination of a case filed by the anti-graft body.

“An order is hereby issued restraining the Respondent/Defendant by themselves, their agents from selling, wasting, transferring, disposing or in any other way dealing with motor vehicles Land cruiser V8,” ordered Judge Wakiaga.

The anti-corruption agency moved to court seeking assets worth over Sh. 73.4 million belonging to Migori Governor Okoth Obado seized, fearing that he might dispose of them.

The targeted properties include two luxurious vehicles- Land Cruisers KCK 722B and KCK 997W- and a home which were frozen last year but Ethics and Anti-Corruption Commission says it is apprehensive that Obado or his agents might sell or transfer them, defeating plans to forfeit them to the government.

“The Plaintiff is reasonably apprehensive that the Defendants/Respondents shall seek by themselves, their agents, servants and/or employees or any other person to sell, lease, charge, enter into sharing deals, waste, transfer or in any other way deal with the aforesaid illegally acquired moveable and immovable properties in order to frustrate and defeat any decree that may be passed against them,” EACC says in the petition filed before the anti-corruption court.

In the documents filed in court, EACC wants Obado and his sons to deliver the vehicles logbooks, failure to which it should be allowed to seize and auction the vehicles and the proceeds be deposited in a joint income earning account.

The commission further wants the monthly rent of Sh143,000 derived from a posh house in Loresho, be deposited in a joint account.