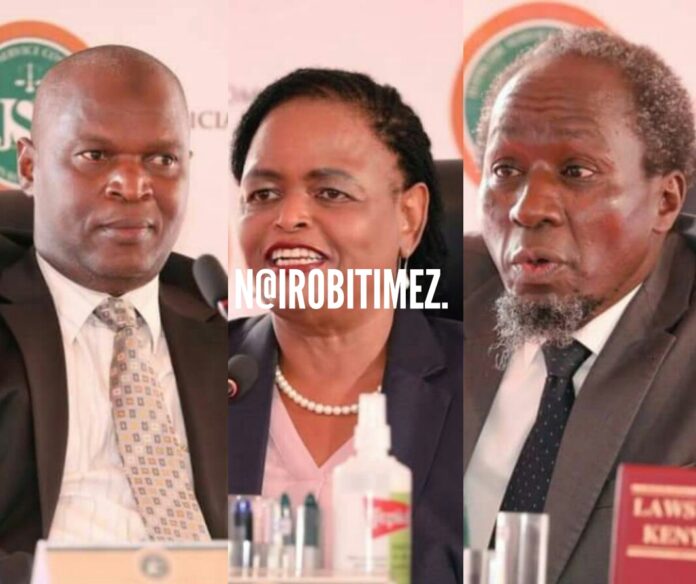 The recent interviews of judges conducted by Judicial Service Commission had proved that decisions made by judges and magistrates may came to haunt them in future while applying for the promotions.

During the interviews, the judges who sought to join the Supreme Court were put to task over their past decisions, some of which are controversial although the concerned officers stood by their judgements.

Commissioner David Majanja who also sits at the commercial division of the High Court surprised many applicants by putting in to task each of them over the past rulings and judgments.

Chief Justice Martha Koome, was for example put into task to explain the Court of Appeal’s decision to sit at night to overturn a decision by Justice George Odunga, who had ruled that the appointment of returning officers, as appointed by the electoral body was unprocedural.

But Justice Koome stood her ground and said she had to obey the orders of the President of the Court of Appeal, who happened to be Attorney General Kihara Kariuki and a commissioner at JSC.

CJ Koome defended the decision saying the matter was urgent and the country was staring at a crisis.

“My lord, the Attorney General was the President of the Court, then, I was working on the bench in Mombasa and Malindi but as you all know the Court of Appeal is a circuit court, even if you’re in Mombasa you can work in Nairobi,” she said.

The judge said on the particular week all the judges were all in Nairobi because the next day was a public holiday for the repeat elections to be held.

Judge Koome said she was called by the Registrar of the COA a Mr Serem and told her that the president had certified the matter urgent and empaneled the bench, including her, to hear the matter urgently.

High Court Judge Said Chitembwe was also put into task to explain how he reached on his decision to set free a 24-year-old man who had been convicted for defiling a 13-year-old girl.

The judge defended his decision arguing that a judicial officer should look at the circumstances of the case and the ruling was based on the practicability of the issue more than the legal framework.

“I did my best to deal with the case at hand and I can tell you for sure that despite all these hullabaloos, the number of magistrates who called to say I freed them from the shackles of Sexual Offences Act are many,” Justice Chitembwe said.

According to him, judge Chitembwe said the judge, the two had consensual sex, which should never be termed as defilement.
Employment and Labour Relations Court Judge David Marete faced the fate during the interviews.

From events and questions regarding various decision made by individual judges, it signals in future and sitting Magistrate or a judge will account for the decisions he or she makes whenever they applies for any promotion from one level to another