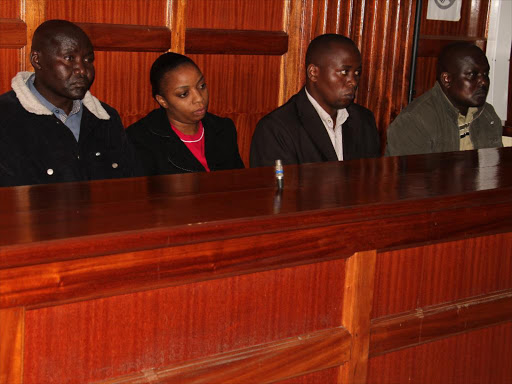 The Investigating officer into the murder of lawyer Willie Kimani, his client Josephat Mwenda and driver Joseph Muiruri has exonerated administration police officer Sylvia Wanjiku from the triple murders.

Nicholas Ole Sena told trial Judge Jessie Lesiit that from the communication data, the officer did not feature as being part of the conspiracy to murder the lawyer, the client and the taxi driver.

He also said although Wanjiku was on duty on the fateful day, when the trio were brought to the post, he only undoing was failing to report to her seniors.

The three went missing on June 23, 2016 after a court hearing in Syokimau and their mutilated bodies were retrieved a week later at Oldonyo Sabuk River, stashed in gunny bags
While being cross-examined by Wanjiku’s lawyer Katwa Kigen, the officer said Wanjiku did not appear on the CCTV camera or data calls, linking her to the murders.

He said the investigation largely dependent on the use of police radio, mobile phone and CCTV footage but Wanjiku never featured in any of them.

The advocate was working with International Justice Mission, an organization that together with IPOA has been investigating cases of police brutality and extra-judicial killings.
One of the handset which was being held by one of the officers showed that it was at Mavoko Law courts, on June 23, 2016, the day the three victims disappeared.

The signal later moved Syokimau police post and in the evening, to an open field an area he said is known as SOWETO.

Police suspect that the three was tortured to death in the open field before the bodies were dumped in a river miles away.

Chief government Pathologist Johansen Oduor, who testified a few months ago, said the three had fractured skulls and injuries on the chest, neck and face. According to him, the three were ultimately bludgeoned to death using a blunt object. They were hit on the head, he said.