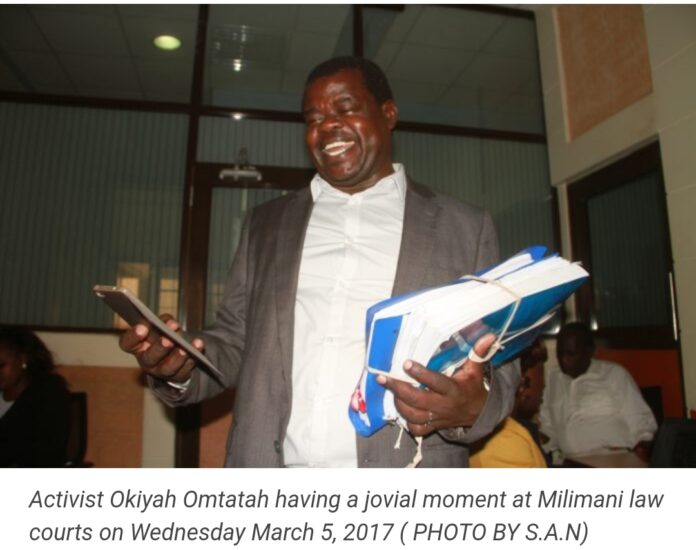 The High Court has suspended the imposition of 25 percent excise duty on all imported furniture.

Okiyah Omtatah told the court that the National Assembly mischievously sneaked in the 25 percent import duty on all forms of imported furniture into the Finance Bill 2021 at the Bill’s Third and Final Reading, being a stage in the legislative process when substantive amendments to Bills are prohibited by the Standing Orders of the House.

He argues that this was made without public participation. “The imposition of 25% Excise duty on imported furniture under Tarrif No. 9304 in the Finance Act, 2021 be a and is hereby suspended pending inter-parties hearing of Notice of Motion dated July 5,2021,” ruled Judge Mrima.

The judge observed that the case was indeed unique in several ways including the rejection by Treasury to impose tax in the issue and possibility of brewing conflict with other member states of East Africa Community (EAC).

Further, effecting the changes at the tail end of the legislative process means that the amendments were passed without Public Participation, which is a violation of the Constitution.

Among those who made presentations before the committee included an association of importers of furniture known as Furniture Importers Group and ministry of National Treasury and Planning.

Omtatah added that at the close of stakeholders’ the committee considered the matter further and the Committee report dated May 4,2021 recommended that the Excise Duty (Amendment) Bill (National Assembly Bill No. 47 of 2020 referred to as ‘the Amendment Bill’ which intended to impose the impugned Excise Duty be deleted in its entirety.

It was Omtatah’s utter shock and surprise, when the report was tabled before the National Assembly, the amendment Bill was reintroduced on the floor of the house and wholly passed.

Attorney General opposed the application seeking the interim orders saying parliament is the only institution invested with the sole mandate to make laws including the passage of amendment Bill.