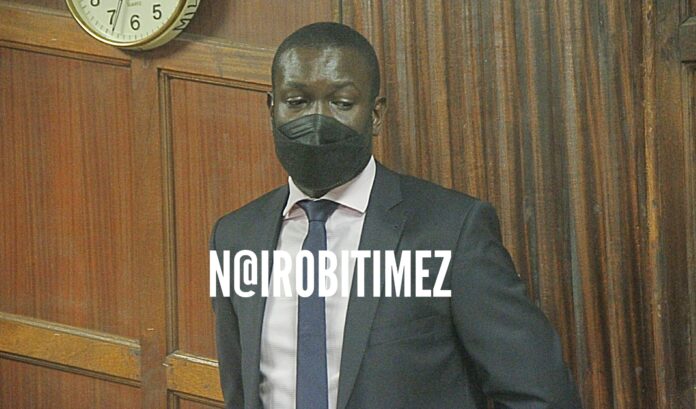 Lawyer Edwin Sifuna, who is also
Orange Democratic Party Secretary General,
has told the court that the Prosecution against his former client businessman Arafat Ikumu Omar is malicious.

While testifying in the case before trial Magistrate Martha Mutuku, where Mr Arafat has been charged, Mr Sifuna said a scuffle had ensued between him and police officers who wanted to take Arafat away from the Milimani Law Courts basement cells.

Mr Arafat is facing the charge of attempt to escape from lawful custody.

The scuffle had started between the two after police who had arraigned Arafat in court failed to secure custodial orders seeking to detain him for 30 days.

“The officers had arraigned the accused in court under miscellaneous application seeking to detain him for 30 days on various allegations. We managed to convince the court, which agreed with us and released the accused on bail”, Sifuna told the court.

He added that the officers were bitter after they failed to secure days sought to detain Arafat and they decided to take him away despite having a release order.

He denied that allegations that Arafat had attempted to escape from lawful custody. He told the court that he was the one who was dragging Arafat from police car since he had already secured release order.

During cross-examination, prosecution insisted that the accused had attempted to escape from lawful custody.

Arafat is accused that on September 14 in the year 2018 at Milimani Law Courts parking yard, he escaped from lawful custody of police officers from Directorate of Criminal Investigations attached to Transnational Organized Crime Unit who were escorting him to Muthaiga Police Station after being arraigned in court through miscellaneous application.

The court will decide his fate on October 6.