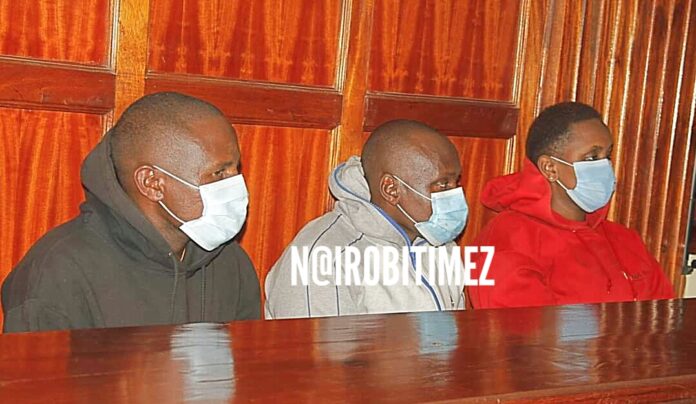 Three police officers arrested following the disappearence of self-proclaimed serial killer Masten Mulimu Wanjala from custody will tomorrow know whether they will be detained 14 days.

The investigators asked the court to allow the trio be detained, pending conclusion of the probe. The three were arrested after the allegedly escaped from custody under their watch.

The officers through their lawyers Danstan Omari and Shadrack Wambui vehemently opposed their detention.

Omari told the court that the Director of Criminal Investigation had recommended the three to be charged but the DPP allegedly refused to sign the charge sheet.

He urged the court not to allow itself to be dragged into the wars between the DPP Noordin Haji and DCI boss George Kinoti.

The lawyers applied for the suspects to be released on cash bail to enable the investigating officers complete their investigation.

The officers defended themselves saying there were no lights at the police station when the suspect allegedly disappeared.

“On the day the suspect escaped from police custody, there was no light. The state failed to provide light, so the police officers on duty took shifts at 7pm in total darkness using the spotlight on their phones to count suspects,” lawyer Omari told the court.

Chief Inspector Wanga Masake sought to be allowed to detain the three officers for 14 days to conclude investigations.

Mbithi, Mutuma and Mwende were arrested on October 13 over suspicions of aiding a prisoner to escape from custody.

They are also accused of failing to prevent escape of the self-proclaimed serial murderer from Jogoo road police station.

The investigating officer said the three are police officers and may interfere with the investigations if they are allowed to be at their working station.

The court heard that the investigator will rely on assistance of the three officers to help them re-arrest the fugitive who is still at large.