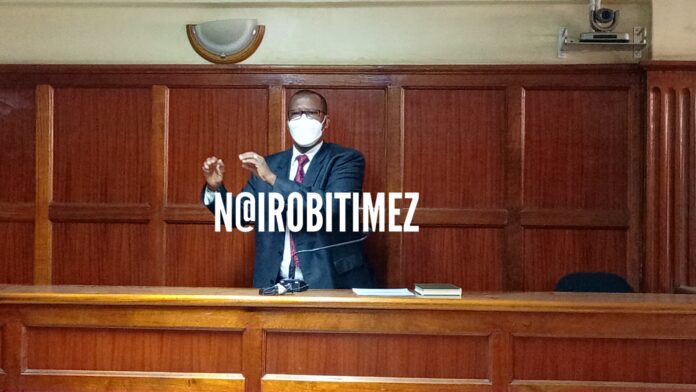 Former SUPKEM chairman Hussein Adan Somo will know whether he will be punished for contempt of court in December.

Environment and Land court Judge Samson Okongo said he will rule on December 15 whether Somo will be sent to jail for disobeying a court order in a dispute with members of a church.

Somo has since denied disobeying court orders directing him to allow members of Wings of Life Gospel Church International to access the disputed parcel of land, pending the determination of the case filed by the churchgoers.

Led by his lawyer Katwa Kigen, Somo said the disputed land belongs to him and that he was allocated the parcel by the defunct Nairobi city council and later as issued with a title deed in 2002.

He said by the time the Bishop of the church Gerishon Kanori obtained the order seeking access, he had already demolished buildings alongside other structures belonging to the church that had encroached on his land.

He said the demolition took place on April 13 and 14, 2021 way back before the bishop obtained the order.

He added that the church is trying to misuse the order as a title deed to take over the whole of his land and evict him and enjoy more land than they ever occupied before the eviction.

“I reiterate that I have purged as per the orders made by court by giving access and allowing the church and any people he comes with to worship at the limited space within my parcel that they occupied up April 13 and 14 April, 2021 when their structures were removed for worship pending hearing and determination of the matter,” Somo told the court.

He added that his parcel of land LR.209/16780  had less than 15% of the church’s worship premises and the church other 80% of the worship structure was on a neighboring property LR 209/16779 owned by the original church.

Somo further urged the court to visit the land to ascertain the truth.

He said the order on April 23 is ambiguous as to whether he should give access to the about 0.001 acres that he church occupied Up to April 13 and 14 or now the court wants him to hand over his whole land to the church

However, Bishop Kanori claims ownership and urged Justice Okong’o to jail Somo to end his arrogance and impunity, claiming the church is the legitimate owner.

He told the court that the church obtained the letters in 1997 but admitted that he has no title.

Bishop Kanari said Somo disobeyed a court order requiring him not to interfere with the suit properly.

The court witnessed a bitter exchange of words between the advocate representing the church and Somo.