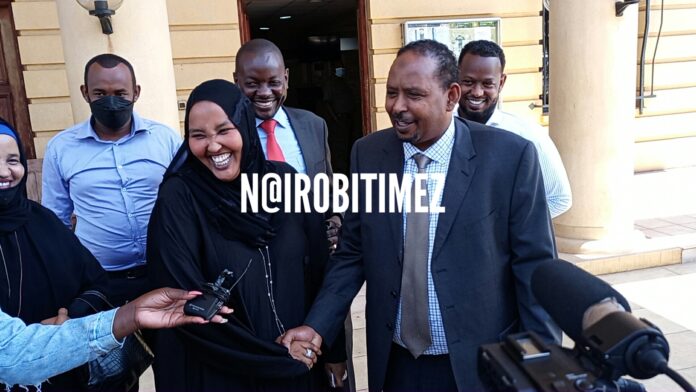 Wajir Woman Representative Fatuma Gedi has patched up her difference with Wajir East Member of Parliament Rashid Kassim Amin, a move that saw her withdraw an assault case against the latter.

While withdrawing the case, Gedi said she decided to forgive her ‘brother and they should continue embrace handshake which was initiated by President Uhuru Kenyatta and his handshake partner Raila Odinga’.

Gedi said she will work together with Kassim and promote unity in Wajir County. They both promised to work together and support each in the forthcoming elections.

MP Kassim appreciated the Woman rep for accepting his apology.

The trial Magistrate Martha Nanzushi marked the case as withdrawn.

She never disclosed to the court the issue in question that led to their difference that resulted in the arrest and prosecution of her colleague in Parliament.

After the court session Gedi while addressing Journalist outside Milimani law courts, said that the withdraw of the case against the MP is a result of the a handshake between President Uhuru Kenyatta and Opposition Leader Raila Odinga, which she said paved the path of handshakes.