She succeeds former secretary general Jerome Valcke, who was banned from football-related activity for 12 years.

Samoura, 54, spent 21 years working for the United Nations and will start at football’s governing body in June.

“It is essential Fifa incorporates fresh perspectives as we continue to restore and rebuild our organisation,” said Fifa president Gianni Infantino.

“She has a proven ability to build and lead teams, and improve the way organisations perform. Importantly for Fifa, she also understands that transparency and accountability are at the heart of any well-run and responsible organisation.” 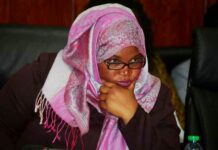