Taiwan ambassador John Chen demonstrating both Chinese and Taiwan passports at a press briefing in Nairobi hotel.
BY SAM ALFAN.

Representative of Taipei Liaison Office in South Africa has asked two Kenyan Cabinet Secretaries to intervene over the deportation of 45 Taiwanese to China on 12 April 2016.

Mr John Chen in a letter sent to Foreign Affairs CS Amina Mohamed and his Internal Security counterpart Joseph Nkaissery said that his countrymen were deported to China in total violation of a court order issued by the high court in Kenya.

Mr Chen told a news conference in Nairobi they had been acquitted by the Chief Magistrate’s court and ordered deported to their country.

Contrary to the order, he said the foreigners were forcefully removed from police cells and whisked away to Jomo Kenyatta Airport en-route to China.

In china, the Taiwanese have been imprisoned.

He added that efforts have been made by both government of Taiwan and Ambassadors and Representatives to have them released by Chinese government to no avail.

Mr Chen said that the extra-legal deportations took place as Taiwan government appealed to have deportation halted until proper arrangement were made to have them taken back to their country of origin.

He asked the two CSs to intervene to have the 45 taken to their country.

“Taiwan has always regarded Kenya as a democratic country which upholds and values the rule of law, equality and human rights. It is completely unnecessary for the country to conform to China’s irrational request” he said 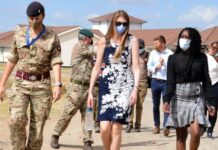