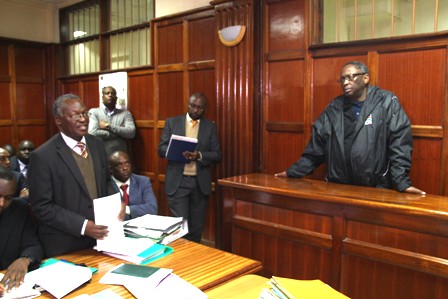 Ben Ekumbo before Nairobi Magistrate Court during the hearing of a miscellaneous application seeking to detain him to allow police complete investigations on Tuesday November 22.2016 (PHOTO BY NT).

He was produced in court Tuesday morning after spending the night cold, when police applied to detain him for seven days pending the conclusion of investigations.

State Prosecutor Eddie Kadebe said the police want to conduct thorough investigations into the case as the kits scandal had tainted Kenya’s image.

He said President Uhuru Kenyatta had called for investigations to establish who messed up with Team Kenya’s preparations and caused the loss of money intended for the games.

Mr Ekumbo opposed the application, saying he is diabetic and was also preparing the country’s swimming team for an international championship.

Ekumbo was arrested by detectives at his apartment in Westlands, Nairobi on Monday. Boxes containing shoes track suits and bags were recovered.

The officers were armed with a search warrant when they arrived at the house.

Police said the raid was part of the their investigations into the Rio games scandal.

Ekumbo was questioned in his house during the afternoon operation as officers loaded the kits, including running and swimming gear, into their vehicle.

In September, a Team Kenya athletics official was linked with the disappearance of assorted kits meant to be used by the country’s Olympic team in Rio.

Kithinji Maragara was arraigned before senior principal magistrate Charity Oluoch and was charged with theft.

He was accused of stealing an assortment of kits on July 29 within Nairobi county.

Ekumbo deputized Head of Mission Stephen Soi at the Rio Olympic Games in Brazil that were shrouded in controversy.