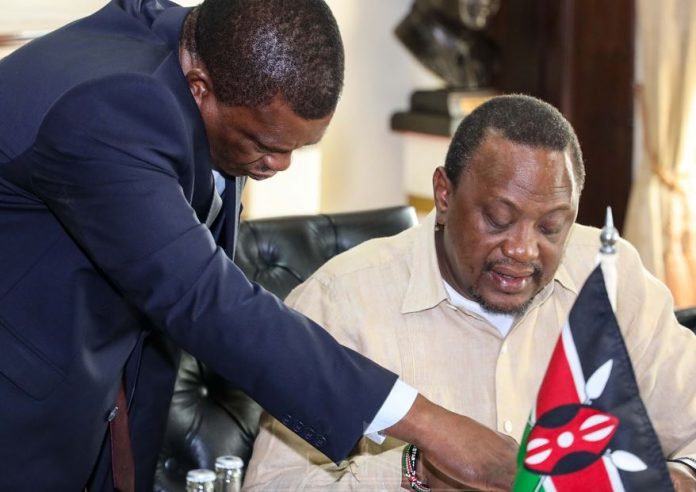 In the application under certificate of urgency, Omtatah wants pending the hearing and determination of the case, the court to issue an interim order, suspending sections 45 and 46 of the Finance Act, 2019.

Omtatah said the petition raises substantial question of law and wants sent to the Chief Justice for the empanelment of a bench of three or five judges, to hear and determine the petition.

He argued that Finance Act 2019 was enacted through a process that grossly violated the Constitution and legislation.

“The Finance Act, 2019 is unconstitutional and, therefore, invalid, null and void ab initio because it was enacted in violation of the High Court decision in Nairobi HC Petition No. 253 of 2018”, said Omtatah.

He also claims that sections 45 and 46 of the Act were enacted through a process whereby the President’s veto powers under Article 115 of the constitution were abused.

The activist said the President abused his veto powers under Article 115(1)(b) of the Constitution, to the extent that he not only vetoed the Finance Bill 2019 but in his memorandum of reservations he drafted proposed amendments to the Bill. The petitioner posits that by so doing, the President engaged in legislation and that breached the separation of powers doctrine which is entrenched in the Constitution of Kenya, 2010.

Omtatah argued that nowhere in the Constitution is the President, after making his reservations (or objections) on Bills he vetoes, empowered to make recommendations on whatever amendments he would like to see made to those Bills.

“The petitioner submits that the abuse of the veto powers by the President invalidated the exercise of the same and, effectively, it meant that there was no veto, hence, the original Finance Bill, 2019 presented to him for assent on October 7, 2019 became law at the expiry of 14 days pursuant to 115(1) and (6) of the Constitution”, Omtatah said.

He is also aggrieved that paragraph 5(b) of the National Assembly Standing Order No. 154 is outright wrong for directing that a vote on a vetoed Bill which fully accommodate the presidential reference (or veto) will be determined by a simple majority of the House.

“The voting percentages under Article 115(3) and (4) of the Constitution are not subject to Article 122(1) but are subject to 122(2)(b), and they don’t concern the quorate House of 50 Members of the National Assembly (MNAs); they concern the membership of the entire House, and, to either defeat or approve the President’s reservations, it requires a simple majority of the whole House (one half + 1 or 175 MNAs out of a total 349 Members) and not a simple majority of the members present and voting in the quorate Chamber”, added Omtatah.

He said he guidance which the Speaker gave to the House on 5th November, 2019, on consideration of the President’s reservations to the Finance Bill, 2019, was inconsistent with Article 94 (5) of the Constitution to the extent that it purported to empower the President to legislate.

He further added that a vetoed Bill dies or is negative in circumstances where an amended Bill fully accommodating the presidential reference fails to get the support of the requisite simple majority of the whole House (175 MNAs) to endorse it, but the opposition to the Bill in the House also fails to garner the two-thirds super majority (233 MNAs) required to override it.