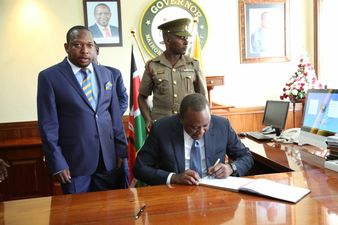 In the court documents, Sonko alleged that President Uhuru Kenyatta sister Christina Pratt Kenyatta called him just before he was impeached asking him to nominate Jane Weru as the Deputy Governor and revoke the nomination of Anne Kananu Mwenda.

He wants the court to stop the Nairobi county assembly from vetting and approving his earlier nominee, Anne Kamau Mwenda as the Deputy Governor.

“It is necessary to have Jane Weru as the Second interested party for her being the person recommended by Christina Pratt Kenyatta to me to assume role and the capacity of the Nairobi City County Governor immediately prior to my unlawful and sham impeachment”, Sonko added.

Sonko further alleges that the first family has been interfering with the affairs of Nairobi City County, both politically and administratively especially after the creation of Nairobi Metropolitan Services and appointed of a military General to run the department by the president.

He said after the conversation with Pratt, he cancelled Kananu’s appointment and wrote to her and the County assembly of the decision on December 7.

The ex-governor in court papers says he withdrew the nomination following pressure from the first family.

He has attached audio clips and transcript of his conversation with Pratt Kenyatta, the elder sister of President Kenyatta.

He terms attempt by the Acting Governor Benson Mutura and the county assembly to clear a candidate who her appointment was revoked as unconstitutional.

“By the said letter dated December 7, 2020, the said Anne Kananu Mwenda was duly informed and alerted on her revoked nomination as such Deputy Governor and she duly confirmed to Sonko receipt of this communication, which she is estopped from denying the validity of.

He relies on the dictum that “An unconstitutional act is not a law; it confers no rights; it imposes no duties; it affords no protection; it creates no office; it is, in legal contemplation, as inoperative as though it had never been.” Hence no lawful appointment of Kananu as the Nairobi City County Deputy Governor stands.

” Unless restrained the county assembly is now threatening to unlawfully vet and impose Anne Kananu Mwenda as the Nairobi City County Deputy governor, hence the necessity of the Conservatory Orders sought,” added Sonko.

Sonko said Mutura who is just a mere acting Governor has arrogated himself powers of a substantive Governor prohibited by section 32(4) of county Government Act by reoppointing sacked staff and sacking others as indicated on his letter dated January 6,2021.

He told the court he had been placed under extremely hard and oppressive conditions on spurious and unsubstantiated allegations that he abused the office of Nairobi Governor yet he has been deliberately he had been put out of the public domain.