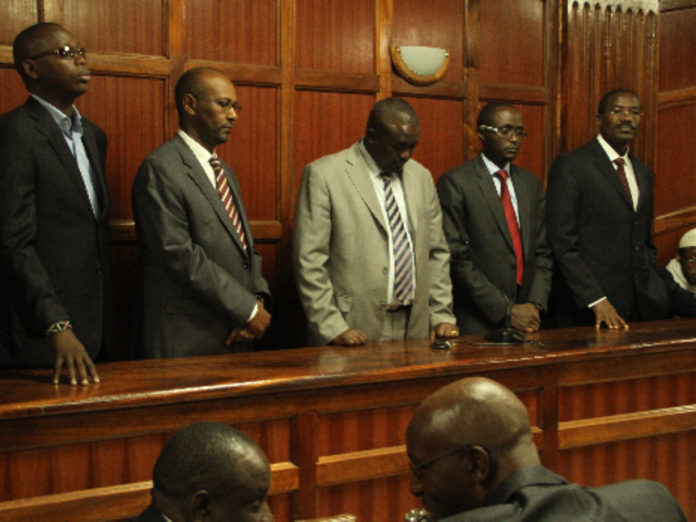 It is a reprieve to former National Hospital Insurance Fund (NHIF) Managing Director Richard Kerich and four others.

This is after judge rejected Director of Public Prosecution appeal to be allowed to amend a charge sheet in a case against Kerich and co-accused.

“I therefore find no merit on the application herein which I hereby dismiss and direct that the lower court file be placed before the trial court for further proceedings to its conclusion” ruled Judge Wakiaga.

Justice James Wakiaga agreed with trial magistrate Lawrence Mugambi that allowing DPP Noordin Haji to amend the charge sheet would further delay the case, which has been going on for the past seven years.

“Having looked at the proceedings before the lower court and in particular the ruling complained of, I am of the view and find that the learned trial magistrate exercised his discretion properly in rejecting the application,” the Judge said.

The Judge said although the DPP had the right to amend the charge sheet at any stage before he closes the case, that power is subject to calling the accused persons to plead afresh and demand for the recall of witnesses to give evidence afresh or further cross-examination.

“I have taken note of the period the trial has taken and how many amendments were allowed by the trial court, during the period of trial and having taken into account the right to fair trial under Article 50 of the constitution and the nature of the proposed amendment, which does not go to the root of the charges the accused persons are facing, but only as regards the mathematical calculation of the figures in question, agree with the trial court, that the right of the accused persons to expeditious trial, while weighted against the right of the prosecution to amend the charge sheet, tilt in favour of the accused person” he noted.

He said given that the amendment only concerned a figure in one of the counts, the right of the accused persons to expeditious trial tilted in their favour.

Kerich has been charged together with Fadhili Marwa Chacha a former manager, strategy and corporate planning, David Chingi a former assistant manager, benefits and quality assurance at NHIF.

Also charged are Peter Ngunjiri Wambugu and Ndiba Warioko and Meridian Medical centre, who have denied charges of conspiracy to defraud NHIF of Sh117 million.

They were charged in connection to the provision of medical scheme for civil servants and disciplined services awarded to Meridian Medical Centre ltd at a cost of Sh116.9 million.

Some 39 witnesses had testified in the case, when the prosecutor sought to amend the charge sheet from the original figure of 43.4 million to Sh46 million.

The defence opposed the move and chief magistrate Mr Mugambi dismissed the application saying it would further delay the trial.

The DPP appealed saying the application was made at an appropriate time and the intended amendment was based on the statement of the investigating officer, which he had supplied to the defence team.

The DPP said no prejudice would be suffered if the application was allowed because the accused person would still be allowed to recall witnesses after the amendment because the prosecution was yet to close the case.

Kerich and other officials are accused of entering a deal with Meridian Medical Centre Limited for the provision of medical services under the civil services and disciplined forces scheme, when they were aware that Meridian had no capacity to provide such services.

Kerich, Chacha and Chingi are facing further charges of abuse of office, failing to comply with procurement laws and conferring a benefit of Sh43 million to Meridian, offences they allegedly committed December 21, 2011 and February 8, 2012.