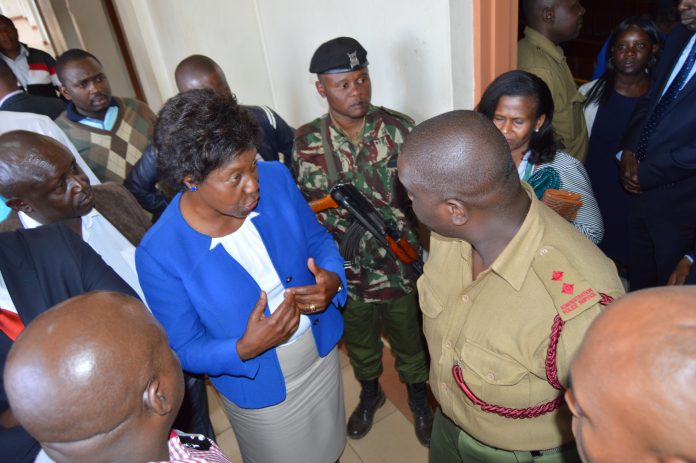 Kitui Governor Charity Ngilu has been summoned before a High Court judge next week over the failure to pay doctors on study leave.

Justice Monica Mbaru directed Governor Ngilu, the county services board and health Chief Executive officer to appear before her on October 14, for disobeying a court order requiring them to pay 20 doctors their dues from July.

The doctors through lawyer Henry Kurauka moved the court complaining of being denied their salaries for four months without explanation.

According to the lawyer, the county was supposed to pay the doctors by close of the day on Tuesday but nothing had happened. The lawyer said he will be asking the court to find her together with the board service members in contempt of court so that they should be committed to civil jail.

“The respondent has until business to confirm payment of the due salaries to ex-party applicant members and doctors in the service”, Judge Mbaru had ordered.

The lawyer said the doctors perform good work in serving the people and their service must be respected especially at this time of covid-19.

Doctors argued that the county are in breach of the rights of the said doctors who are employed by the Respondents and have a right to fair remuneration pursuant to Article 41 (2) (a) of the constitution and Employment Act.

They told the court that failure to pay July 2021 salaries due to an employee, the Respondents are in breach of section 1 7 and 1 7 of the Employment Act which obligate the employer to pay salaries and allowances at the end of each working month without unreasonable delay.

According to the doctors, failure to give the said doctors a reasonable opportunity to be heard and defend prior to making a decision to stop their salaries which breaches their rights and the rules of natural justice.