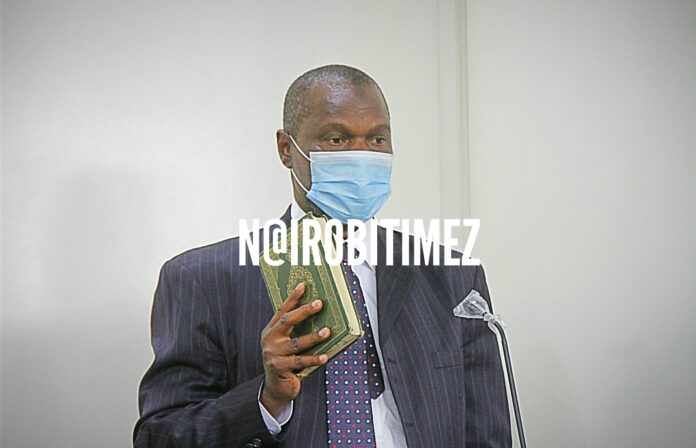 High Court Judge Said Chitembwe has suffered a blow after the Judicial Service Commission (JSC) overruled his objection as it probes bribery claims against him.

The JSC dismissed his objection saying it will proceed with the probe against the Judge, who faces several complaints surrounding graft allegations.

Justice Chitembwe filed the preliminary objection arguing that the commission cannot hear the matter since the decision leading to filing of the petition in question are pending before appellate court.

A panel chaired by Prof Olive Mugenda together with Felix Kosgei, David Majanja, Patrick Gichohi and Evelyne Olwande dismissed the objection saying it lack of merit.

“The Preliminary Objection as raised by Justice Chitembwe lacks merit and the same is dismissed,” the commissioners ruled.

They further ruled that admissibility of the audio or video recordings will be determined at the hearing of the substantive petition.

“Preliminary objections are raised on pure points of law only and cannot be raised on disputed facts and facts have to be ascertained and evidence probed on the issue on whether or not the matters before the Commission is sub judice, evidence illegally obtained and right to privacy violated”, said Sonko.

The former city boss added the rule of sub judice is not applicable in the circumstances of thw case since such a plea requires evidence to be considered from both sides.

According to Sonko, the plea of sub judice should have been raised by way of an application so that the parties are afforded an opportunity to respond by way of evidence.

He further said the issues raised in the Petition are with respect to the conduct of the Judge regarding corruption and incompetence while the matter at the Court of Appeal relates to the impeachment of Sonko as Governor of Nairobi City County.

“The electronic evidence intended to be relied upon by the Petitioner at the hearing is sufficiently incriminates the Honourable Justice Juma Said Chitembwe and is admissible and the attendees of the meetings leading to the recordings are present and available to testify and to verify as to the contents of the electronic evidence”, he added.

His PO further adds that the contents of the electronic evidence intended to be relied upon by the Petitioner are not in dispute as the same was not illegally obtained and is admissible.